Three cars and a truck successfully drove themselves 125 miles down a highway in Spain, using radar and laser tracking... 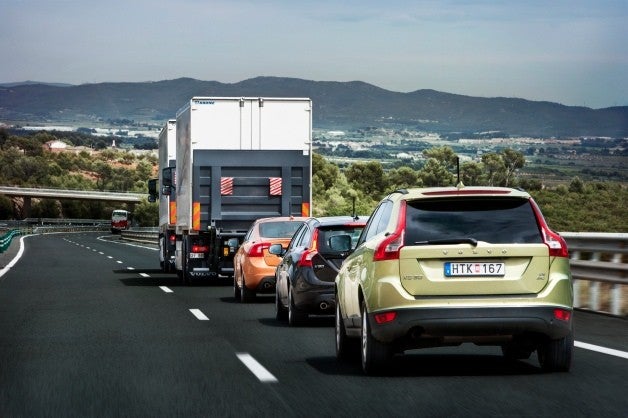 Three cars and a truck successfully drove themselves 125 miles down a highway in Spain, using radar and laser tracking to follow each other closely while their human passengers read magazines. Project SARTRE (Safe Road Trains for the Environment) tested the vehicles alongside actual human motorists, some of whom may have caused safety issues of their own by rubbernecking at the hands-free steering wheels.

Volvo and car automation company Ricardo wanted to test how well the cars could follow a lead vehicle in real traffic. A truck and three Volvo vehicles, an XC60, a V60 and a S60, drove behind a manned, controlled truck cruising at 53 miles per hour. The team covered 125 miles in one day, according to Volvo, which is one of the main SARTRE partners. The cars traveled between 16 and 50 feet apart throughout the test.

The vehicles used wireless cameras, radar and laser sensors to monitor the lead truck as well as other cars. The entire platoon follows the actions of its leader, including steering, braking and accelerating, according to Volvo. In that sense, the cars aren’t totally autonomous, but collectively following one human-controlled vehicle. Watch in the video below as one of the passengers requests to join the platoon, and nervously takes her hands off the wheel.

Project SARTRE has been testing this configuration for several years now, but this is the first time the self-driving cars got themselves on the road with other traffic. It’s a key piece of evidence that a system like this could work.

People are going to do stupid things (read the paper, apply makeup, drink coffee) during their morning commute whether or not the car is driving itself, so a system like this could improve road safety. It could also reduce emissions by letting cars drive in close proximity to each other, drafting off the leader. After this test, the project’s next phase is to analyze platoon fuel consumption, according to Volvo.