High speed trains are so passé — for comfortable superfast travel, hop on the Superbus. With a top speed of... 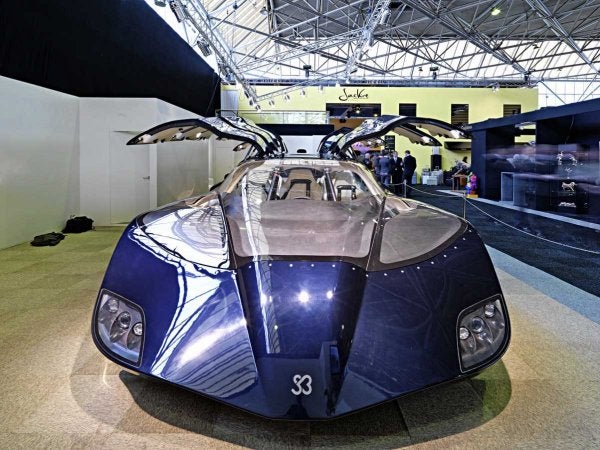 High speed trains are so passé — for comfortable superfast travel, hop on the Superbus.

With a top speed of 155 MPH, the new Superbus, which sort of looks like an elongated Batmobile, could be an efficient way to reduce congestion at a lower cost than building new trains or other public transit systems.

The project is led by Wubbo Ockels, the Netherlands’ first astronaut and a professor of aerospace sustainable engineering and technology at TU-Delft.

Made of carbon fiber with an electric motor, the Superbus is the same width and length as a normal bus, but sits much lower to the ground. It seats 23 passengers in a luxury setting, with multimedia controls in each comfortable seat. The harness-style seatbelt makes you feel like you’re in a racecar (racebus?) and 16 gull-wing doors give it a DeLorean-like feel.

The bus debuted last fall and is starting to appear at transit trade shows. Ockels will demonstrate the bus at a show in Dubai in May, according to the BBC.

Ockels shows it off in this video below. We have no idea what he is saying, as we are unable to speak freaky-deaky Dutch, but the video nicely demonstrates the Superbus’ attributes.