Just when the drone war was starting to get good, DARPA is looking for a way to make stealthy reconnaissance... 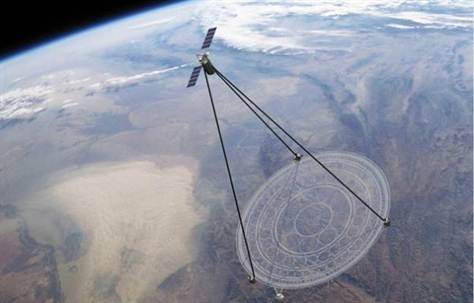 Just when the drone war was starting to get good, DARPA is looking for a way to make stealthy reconnaissance drones–like the not-so-stealthy RQ-170 that ended up in Iranian hands a couple weeks ago–obsolete. The DoD’s blue sky research arm is looking to develop recon satellites with optics so good that they can hover way up in geosynchronous orbit and still capture live high-res video of any spot on the planet’s surface.

The problem: the network of spy satellites already in orbit can take still images in pretty impressive resolutions, but they cannot capture video. In order to orbit at the low altitudes needed for their optics to capture decent imagery, they have to move very fast–way too fast for video capture. Geosynchronous orbit–wherein satellites move at the same rate as the Earth’s location and thus remain stationary in the sky relative to the Earth–is much higher up at about 22,000 miles.

Capturing live video across 22,000 miles of Earth atmosphere isn’t easy, and launching satellites with the massive optics required to do so has proven pretty unfeasible in the past. But naturally DARPA has something new up its sleeve: membrane optics. This sort of thing has never been tried, but it might just make video from geosynchronous orbit a reality.

The idea currently described in a proof of concept from Ball Aerospace–working under a DARPA contract–envisions a lightweight satellite that would unfurl a huge flexible membrane once in orbit. That membrane would deploy at the end of several extensions that would hold it some distance away from the satellite itself, basically creating a huge lens. The entire array would function as a huge aperture telescope–DARPA wants a collection aperture of nearly 66 feet eventually (that’s three times bigger than the James Webb Space Telescope)–that would be capable of capturing video of individual military vehicles (like mobile missile launchers; specifically the program calls for “probability of detection for a SCUD-class launch of 0.99, with less than one false alarm per month”) on the ground. That means ideally it would see things less than 10 feet long.

For starters, Ball plans to create a 16-foot membrane optics array for testing followed by a 32-foot membrane ‘scope for actual flight tests on orbit. If that successfully delivers the kind of imagery DARPA is looking for, the satellite video capturing technology promised by every James Bond movie since 1980 could be hovering in geosynchronous orbit by decade’s end.