More than a year after capturing one of our drones, Iran is still trying to taunt us with it. 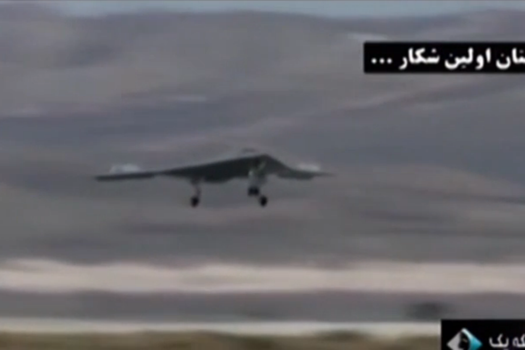 Video extracted from a CIA spy drone that Iran captured in 2011 has been broadcast on the country’s state television — or that’s what Iran says. The video was released in the midst of tightening U.S. sanctions to pressure Iran to limit its nuclear program and rein in institutions that are censoring free speech and political dissent.

Iran has claimed it has been able to reverse-engineer the drone, the RQ-170 Sentinel. Iran captured the drone in Iranian airspace near the Afghan border in late 2011.

This latest publicity stunt is one of many recent attention-grabbers touting Iran’s technological advances. Over the weekend, Iran announced that it had produced a fighter jet with stealth capabilities, something aviation experts have called into question. In December, the country claimed to have captured a ScanEagle drone in Iranian airspace over the Persian gulf — a claim U.S. officials say there’s no evidence to support.

When news of the drone’s capture first broke in 2011, the U.S. claimed the whole thing was an accident — that the drone’s controllers had lost contact with it and it had maybe wandered into Iranian airspace. Later, U.S. officials confirmed that in fact, the top secret drone had been monitoring military and nuclear facilities in Iran, but claimed that it had malfunctioned, not been brought down electronically. And then we asked for it back.

Now, a year later, Iranian state television has aired what they say is video from the drone — aerial views of an airport said to be a U.S. drone base and a city reported to be Kandahar, Afghanistan. It shows images of the drone being transported and its disassembled parts.

The chief of the Revolutionary guard’s airspace division also appears in the video. “We were able to definitively access the data of the drone, once we brought it down,” he says. Iran has claimed it is now capable of producing its own version of the unmanned aircraft, the AP reports.

At this point, it’s hard to evaluate claims made on Iranian state television. Remember the monkey?