The quadrocopters at ETH Zurich’s Flying Machine Arena already have some amazing autonomous moves. But engineers want to make them... 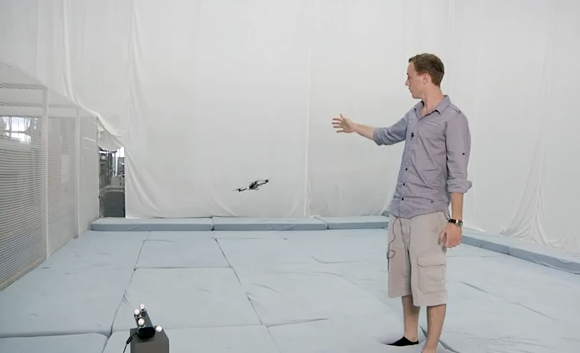 The quadrocopters at ETH Zurich’s Flying Machine Arena already have some amazing autonomous moves. But engineers want to make them easier and more intuitive to control, so they turned to the Kinect.

The Kinect sensor tracks the movements of a person in the arena, monitoring his arms and shoulders. As he raises his arm, the quadrocopter takes off; he can control it by sweeping his right arm around.

A raised left arm tells the quadrocopter to flip; a clap of the hands tells it to land. If the user drops both arms, the quadrocopter will hover. The user is protected by a no-fly zone around him, so the quadrocopter can’t fly into him. A standard controller gives the copter directions, as the video explains.

Other Kinectified drones and quadrocopters use the motion sensor technology to navigate; this one lets the humans do the navigating. Previously, the human controllers at the FMA have used a wand to direct the copters’ flight, but simple arm gestures are more intuitive.

This system is much simpler than other human-machine interfaces we’ve seen — and another great use for the Kinect. Check out ETH Zurich’s demo below.