How the designer of Blade Runner thinks the future will look 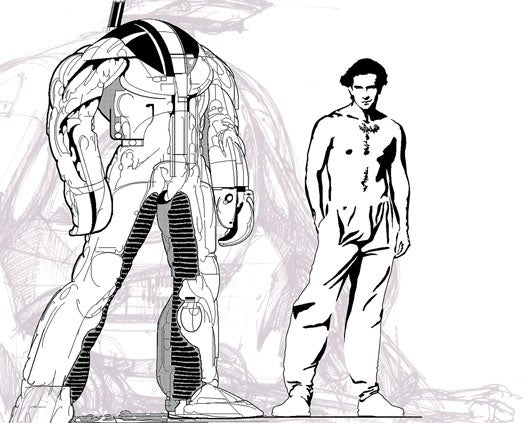 Science fiction is where the future happens first, and that puts futurist Syd Mead at least two steps ahead of the rest of us. The 78-year-old conceptual artist may be best known for designing the flying-cop-car-patrolled Los Angeles streetscapes in Blade Runner, but he also dreamed up the original light cycles in Tron, the Marine-transport starship in Aliens, and visions of a class-stratified, off-Earth world for Neill Blomkamp’s highly anticipated March 2013 feature Elysium. Here, Mead makes predictions for what we might one day see in film, in real life, or both.

Pointing to new electroactive polymers that contract powerfully and predictably when exposed to a charge, Mead foresees an era of lightweight human exoskeletons. Such strap-on limb supports could strengthen soldiers and help the elderly and the paralyzed. “These new materials are better than hydraulics or electric motors,” he explains, “because they have a directional axis to pull and push, much like muscles do. So they’re very efficient, and more like a sheath than a bulky cylinder. That’s going to change the world.”

“Cars have already become semi-sentient,” says Mead, citing the recent introduction of consumer-level “self-parking” systems. Soon cars will be able to communicate with one another, which could end slowdowns caused by erratic human judgment. “It’s all just geometry,” he says. “To have 1,000 drivers trundling down the freeway, making their own second-by-second decisions, is awful.” There is, he notes, also a potential downside: “Cars will be able to notify your insurance company immediately if you’ve hit something.” Even the smallest bump could drive up your rates.

3-D printers, which lay down consecutive layers of urethane resin to create detailed objects, have become crucial prototyping tools for Detroit automobile designers and Hollywood special-effects houses alike. Mead says that soon these printers will be loaded with live human cells rather than sprayable resins. The micro-precise nozzles could turn out custom replacement body parts built using our own stem cells. “You’ll be able to make extremely intricate closed-volume solids at will,” he says. “No seams. That is amazing. And it reduces economies of scale to zero. You can make one item at a time, as demand requires.”

Riffing off universal chassis systems such as GM’s drive-by-wire “skateboard” concept, Mead foresees a day when we’ll be attaching new car-body modules onto an underlying, independently powered frame as quickly and easily as we change shirts. “I first rendered this concept over 40 years ago,” he says (he began his career at Ford Motor Company’s Advanced Styling Studio). “Once it gets going, in about 10 years, it’s going to mark a huge change. In some ways, it’s like what happened in the 1910s and 1920s, before cars became fully mass-produced. You’d buy a Deusenberg chassis, then have a custom coach builder put the body on it.”

Given the ever-increasing prevalence of cashless purchases, Mead says we are headed for a world of covert bank-account warfare directed by government bureaucrats. “You’re standing naked to the electronic-surveillance world with every financial transaction,” he says. Whether through radio-frequency ID chips, phone transactions, or mobile credit-card processing and Web transactions, financial information is becoming more easily intercepted, tracked, and correlated to personal information, such as national identity, bank-account information and employment history. “All somebody far above you in the hierarchy has to do is hit ‘delete.’ Instantaneously you’ve become a non-person, economically. That’s scary to me.”