Scientists working with DARPA and Department of Energy backing have cracked the code on a kind of technological milestone, for... 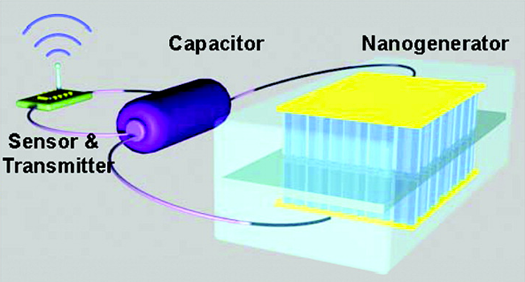 Scientists working with DARPA and Department of Energy backing have cracked the code on a kind of technological milestone, for the first time developing a nano-device capable of powering itself by harvesting energy from vibrations while at the same time transmitting data wirelessly over long distances. That kind of technology could have huge implications for devices ranging from surveillance implements to airborne sensors to implantable medical devices.

Publishing their findings in the journal ACS Nano Letters, the team describes a nanogenerator that turns mechanical vibrations scavenged from anything from a person’s pulse to a breeze to a person walking or cars driving over a bridge into electricity to power the device. That in and of itself isn’t so impressive, as such vibration-driven generators already existed previously.

The game-changer here is the fact that this nano-device can generate and store (in a capacitor) enough energy to also transmit wireless signals to a receiver up to 30 feet away via a transmitter roughly equivalent to those in Bluetooth headsets. The idea that something so small might be able to transmit data across distances could lead to new generations of medical sensors powered by a person’s own blood flow, environmental sensors powered by the ebb and flow of atmospheric air, and wearable sensors that run and transmit on the power leftover by the wearer’s own footsteps.