For more than a year we’ve been posting grainy images of the Air Force’s RQ-170 Sentinel stealth drone, also known... 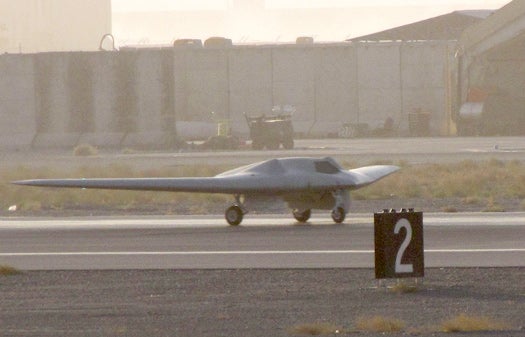 For more than a year we’ve been posting grainy images of the Air Force’s RQ-170 Sentinel stealth drone, also known as the “Beast of Kandahar,” and speculating about its potential mission profile. Now, via a tweet from the National Journal’s Marc Ambinder yesterday, we might finally have an answer: “US Joint Special Operations Command SMU — from DEVGRU (Navy SEALs), did the shooting. RQ-170 drone overhead. JSOC spotters on ground.”

So was the Beast in the air over Abbottabad during the raid on Bin Laden’s compound? That’s the rumor anyhow, and if true it would be the first operation linked to the RQ-170 that we know of. It would also tell us a bit more about what it can do. We know President Obama and company were watching full motion video of the operation as it unfolded, and Ambinder mentions a hyper-spectral sensor elsewhere in his reportage of the event. The Beast could have been providing either, or both.