A DIY UAV That Hacks Wi-Fi Networks, Cracks Passwords, and Poses as a Cell Phone Tower

Just a proof of concept, for now 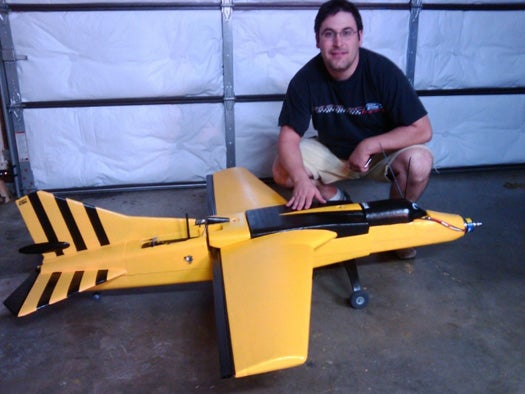 Last year at the Black Hat and Defcon security conferences in Las Vegas, a former Air Force cyber security contractor and a former Air Force engineering systems consultant displayed their 14-pound, six-foot-long unmanned aerial vehicle, WASP (Wireless Aerial Surveillance Platform). Last year it was a work in progress, but next week when they unveil an updated WASP they’ll be showing off a functioning homemade spy drone that can sniff out Wi-Fi networks, autonomously crack passwords, and even eavesdrop on your cell phone calls by posing as a cell tower.

WASP is built from a retired Army target drone, and creators Mike Tassey and Richard Perkins have crammed all kinds of technology aboard, including an HD camera, a small Linux computer packed with a 340-million-word dictionary for brute-forcing passwords as well as other network hacking implements, and eleven different antennae. Oh, and it’s autonomous; it requires human guidance for takeoff and landing, but once airborne WASP can fly a pre-set route, looping around an area looking for poorly defended data.

And on top of that, the duo has taught their WASP a new way to surreptitiously gather intel from the ground: pose as a GSM cell phone tower to trick phones into connecting through WASP rather than their carriers–a trick Tassey and Perkins learned from another security hacker at Defcon last year.

Tassey and Perkins say they built WASP so show just how easy it is, and just how vulnerable you are. “We wanted to bring to light how far the consumer industry has progressed, to the point where public has access to technologies that put companies, and even governments at risk from this new threat vector that they’re not aware of,” Perkins told Forbes.

Consider yourself warned. For details on the WASP design–including pointers on building your own–check out Tassey and Perkins site here.