For some reason, telepresence–the concept of having your person (in audio and/or video form) represented by some kind of machine... 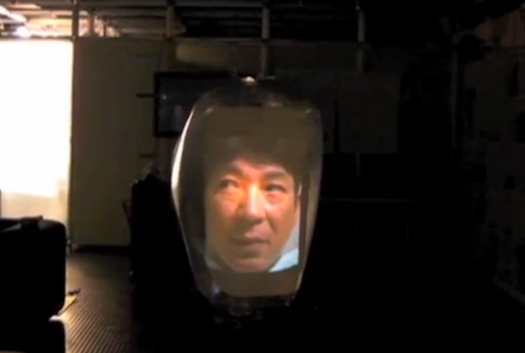 For some reason, telepresence–the concept of having your person (in audio and/or video form) represented by some kind of machine while you are physically elsewhere–has lent itself to extreme goofiness. It’s not really a goofy idea, and yet we’ve seen squishy larval phones, shoulder-mounted robots, the Anybots robot (which recently ordered coffee in a Palo Alto shop), and now this blimp-like thing from Sony that projects your face onto what’s essentially a motorized balloon.

Created by Tobita Hiroaki and his team at Sony, the blimp (which is still nameless) shows a projection of the telepresence-r’s face on a meter-wide balloon. (Hiroaki says his colleagues find talking to such a large floating head “very strange.”) It works generally like all blimps do, powered by a few small propellers located underneath the balloon. It’s controlled remotely, with a webcam on the user’s face updating live, and broadcasts audio through a built-in speaker.

The idea is to solve a problem most telepresence robots, like the Anybots, have: stairs. Getting a robot to climb stairs is a hell of a challenge, and to keep costs down, telepresence robots like the Anybots robot generally just use non-stair-compatible wheels. So why not merely float over them instead? The project is still very much in development, but could be pretty useful for remote monitoring and things like that. Hopefully it works better than our recent misadventure in telepresence, regardless of how much we enjoyed the frustrated liveblog.