Reporting from the Special Operations Forces Industry Conference in Tampa, Danger Room got some hands-on time with a technology that... 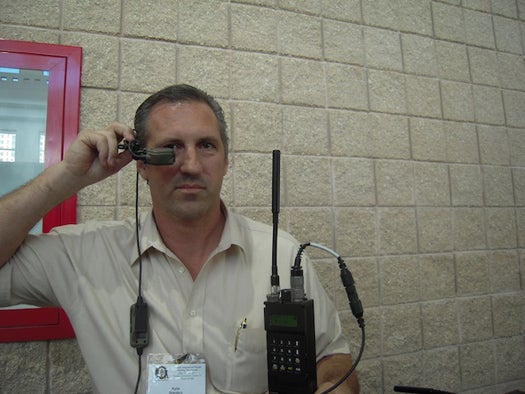 Reporting from the Special Operations Forces Industry Conference in Tampa, Danger Room got some hands-on time with a technology that may or may not have been used in the raid on Osama bin Laden’s Abbottabad compound. Called Mover-IV, it lets special ops soldiers keep one eye in the sky during missions by feeding video from overhead drones or spy planes directly to a monocle fitted to the soldier’s headgear, no bulky laptop or receiver necessary.

Putting that drone footage front and center is increasingly important as operations lean more and more heavily on their unmanned aerial vehicles for mission critical information. The amount of gear that used to require was daunting, especially for troops who specialize in being nimble (that often requires leaping out of aircraft). At just a few pounds and hands-free, Mover-IV solves a serious tactical problem by allowing to soldiers download video straight into their field of view without taking their eye(s) off the battlefield.