Apple's newest version of OS X arrived today, with a heap of future-looking features in tow. Here are five of our favorites 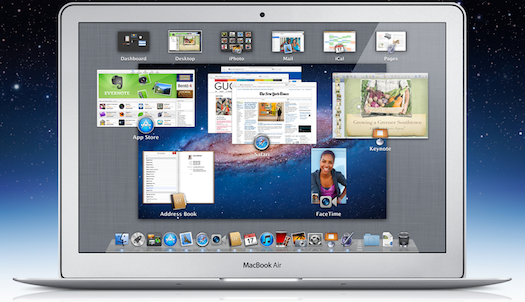 The newest version of Apple’s desktop and laptop operating system, Mac OS X, was released today, as version 10.7–better known as Lion. It’s a major overhaul for OS X, blending elements of Apple’s mobile iOS operating system and moving the design further away from the cutesy, bubbly visage of its past. But beyond the talk of modal interfaces and the rise of mobile are a whole bunch of new features that are flat-out futuristic–cloud-based downloads, ad-hoc sharing, new uses for multitouch, and more. Here are our five favorite forward-looking features in Mac OS X Lion.

Check out Mac OS X’s newest tricks in the gallery. 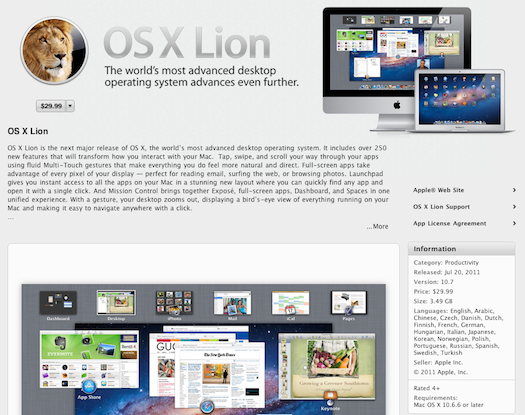 Lion is the first Apple operating system to be available only via download from the Mac App Store (not to be confused with the iTunes Store, or the iOS App Store, or the Amazon App Store, or any other app stores) that debuted with OS X Snow Leopard, the previous installment. Without the need of any discs at all, Lion begins downloading to your Mac’s dock with the simple click of a button and transfer of $29.99 from your iTunes account. It’s quick, easy, and definitely a testament to Apple’s insistence and reliance on the disc-free App Store for all your Mac needs. No more waiting for install discs to arrive in the mail, no more slow, disc-based installs, no more need for an optical drive at all (welcome news to MacBook Air users, we’re sure). But it also leaves the question of how a user will be able to reinstall Lion if their OS becomes corrupted or their hard drive fails. Apple has yet to release any information on that, but as seen with the new MacBook Airs that will boot Lion off an accompanying in-box flash drive, that sounds like another avenue for the future that Apple seems happy to pave. 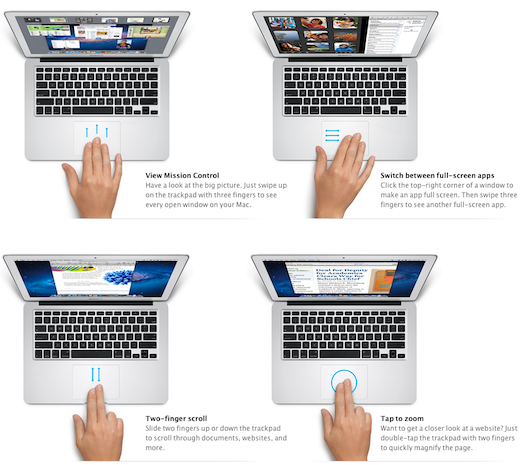 Multitouch: Way More Multi Than Before

The multitouch gestures that were made famous by the iPhone and iPad are not new to Macs; MacBook track pads have been capable of a handful of touch controls, like enlarging web sites by pinch/zooming and going back and forth between Spaces with two-finger swipes. (There have long been programs like Multiclutch that add some extra touch functionality.) But Lion adds a whole new dimension of multitouch, especially as relates to the kinda-confusing Mission Control, a melange of Exposé and Spaces. Swipe three fingers up to access Mission Control, pinch with your thumb and three fingers to jump into Launchpad, or spread with your thumb and three fingers to show the desktop. You can double-tap with two fingers to quickly zoom into a page, just like on Mobile Safari. There are a whole bunch more, too. We love multitouch–it seems like both a futuristic and sensible way to move past the mouse and navigate around a modern computer. Not to bring up the dreaded Minority Report reference, but gestures have always seemed like the future–and Apple is bringing that gesture-future one step closer. 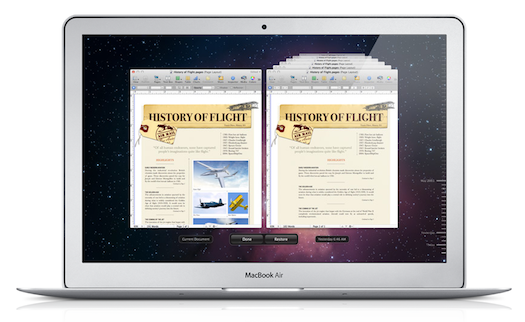 Lion tries to completely remove the disastrous affects of accidental deletion and the self-cursing that arises when you forget to save. There are three different new features that aid in that noble goal. With Resume, every single application will save its state right before you quit, allowing you to jump right back into what you were doing in the same way your iPhone and iPad saves their multi-tasking apps. This not only gives even the most basic of Mac users complete and total data security, but it will also be a lifesaver when intensive programs pull the plug on themselves and force to restart. Then there’s Versions, which automatically takes snapshots of every document so you can compare changes. It even lets you do a side-by-side viewing so you can scroll through all previous versions of your documents like a catalog, sort of like how the Time Machine works with backups in Snow Leopard. It’s a pretty amazing feature, especially for those writing longer or frequently revised works, because you can see the entire progress of your work, and dive back into any previous version. Finally, there’s Auto Save, which constantly backs up your documents, saving every five minutes or during periods of inactivity. Coupled with Versions, this is the ultimate never-lose-your-stuff package, which is great for everyone except college students looking for a cheap excuse to hand papers in late. At the moment, these features are only available on certain Apple-made apps like TextEdit, but the APIs are available to all, so you can expect to see Versions, Auto Save, and Resume on your document-creator app of choice fairly soon. 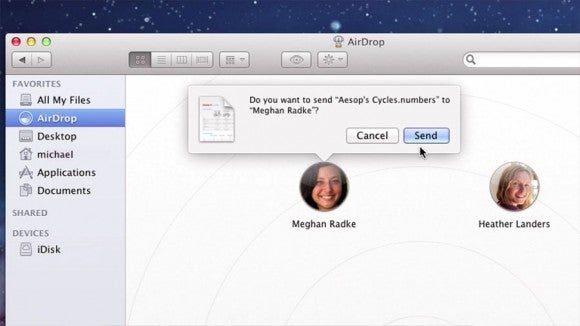 Beam Files to Other Computers, Even Without Wi-Fi

One of the most futurey features of Lion is the ability to share files between Macs with no Internet connection. Right now, sharing files is often very tricky–two Macs on the same network can manage it relatively easily, but away from a network? Forget it, it’s time to break out the thumb drives. Enter AirDrop. Combining Bluetooth accessibility and Wi-Fi speed, AirDrop connects through a peer-to-peer Wi-Fi connection that requires no base station. Macs running Lion can drag and drop files to each other as long as they’re within 30 feet, and the app isn’t even obstructed when both computers do happen to be connected to two different Wi-Fi base stations. Best of all, it’s ridiculously easy to use: Lion automatically finds other AirDrop-compatible computers (basically, a Mac running Lion) nearby, and lists them in the Finder. Then you just drag-and-drop any files you want to that lucky neighbor’s name. The files are encrypted to prevent hacking, and Apple actually creates a firewall to protect you and the person with whom you’re sharing while using AirDrop. Plus, you can make yourself invisible very easily: Just close the Finder window, or click outside the AirDrop window to focus elsewhere. Done! 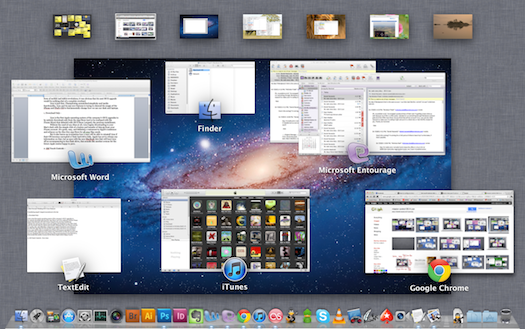 Apple loves simplicity. When given the chance to create an entirely new OS, without having to build upon decades of history and support millions of users, they came up with iOS, the most insanely simple (though not simplistic) operating system of the modern day. Simple doesn’t mean dumb, nor does it imply a lack of control: Apple simply likes its user interfaces to be streamlined, sleek, and intuitive. For the first time, Mac OS X is showing that philosophy. Apple titled the presentation at which OS X Lion was unveiled “Back to the Mac,” meaning iOS ideas would be merged with Mac OS X power. Sometimes it works, and sometimes it doesn’t–but we wholly agree that computers in the future will be simpler, not more complex; more intuitive, not more arcane. Full-screen apps are something very new for Mac OS X. They remove all the clutter while you’re, say, mining the web, by taking away the dock and top task bar and giving your whole screen to the app. But full-screen apps aren’t just a new “maximize” button: Running an app in full screen changes the way the OS devotes power to the app. It’s not only the user getting more focus on each individual task–the computer focuses as well. It only works with certain apps, and sometimes proves difficult to get out of (you have to get the toolbar to drop down and find the exit full screen option), but it’s certainly a more simple way of helping to turn on tunnel vision when you need to get one thing done. Exposé and Spaces, two tools from the previous version of Mac OS X, allow you to see and control screenshots of all your currently-running apps. It was sometimes thought of as too confusing for the average user, and Apple decided to merged them into Mission Control, an all-in-one organizing app that displays six permanent desktop screens on the top and a circle of current open apps in the middle of the screen. Does this work? Well…eventually. It actually goes against Apple’s love of intuitiveness–it is confusing as all hell at first, but eventually you start understanding how it works and why it’s effective. We’re not huge fans of it, but we do like the idea of an all-in-one app manager–and we’re hoping Apple fixes the execution sooner rather than later. Then there’s Launchpad, which adopts the homescreen look of the iPhone and iPad. Launchpad lives in your dock, and functions as an alternative to the usual, simplistic list of installed apps. Instead, with a simple multitouch gesture you can enter the viewer to scroll through your app collection and even make folders in the very same way you do on iOS. Launchpad works best on small screens, especially the diminutive 11.6-inch MacBook Air, but we like the idea of a simple yet customizable list of apps that you can easily access.
Apple
apples
feature
Mac
mac os