Commanding an army of drones is one thing; letting drones command themselves is something else entirely, especially when they have... 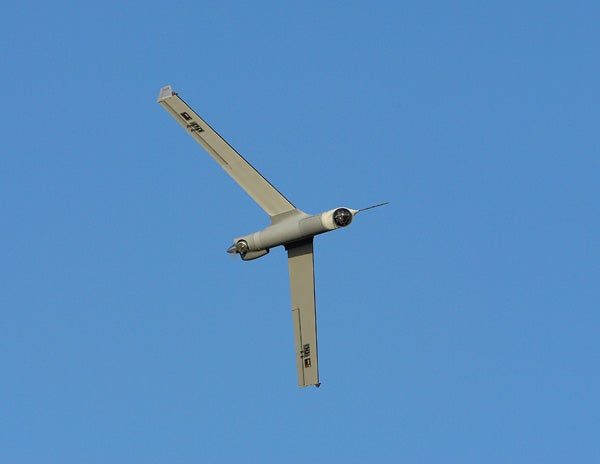 Two ScanEagle drones, like the one pictured here, and a Procerus Unicorn drone joined forces to search a ground area in a test of UAV swarms. Boeing
SHARE

Commanding an army of drones is one thing; letting drones command themselves is something else entirely, especially when they have very little in common. Boeing recently tested a swarm network to help disparate drones work together, sending two types of unmanned aerial vehicles on a reconnaissance mission over eastern Oregon.

The test, which was announced last weekend although it took place in July, teamed two ScanEagle drones with a Procerus Unicorn from Johns Hopkins University’s Applied Physics Laboratory. The aircraft communicated using a mobile ad hoc network and swarm technology developed at APL, according to Boeing.

The aircraft worked together to search a test area, mapping terrain and generating waypoints while sending information to teams on the ground.

Autonomous aircraft working together isn’t new — we’ve seen several cool examples, from quadcopters working together to build towers, to boomerang ‘bots collaborating to scan disaster areas. This project is unique because it integrates two disparate types of aircraft, which is likely to be necessary if drone swarms are ever called up for duty.

In a disaster area or war zone, if drones are present at all, odds are pretty good that they won’t all be exactly the same, or they at least won’t have the same hardware. Swarms of these unrelated drones would need some common communications system in order to work together. Ideally, drone swarms could improve response times, by letting drones work out the most efficient routes and sorties amongst themselves. JHU’s swarming technology is designed to do just that — and reduce human pilot requirements.

Gabriel Santander, Boeing’s Advanced Autonomous Networks program director, said it was a “milestone in UAV flight.” More tests are planned for next month, according to Boeing.