From NACHOS to MAHEM: Naming The World’s Most Advanced Military Tech

What's in a name? For DARPA, acronyms are more than just shorthand 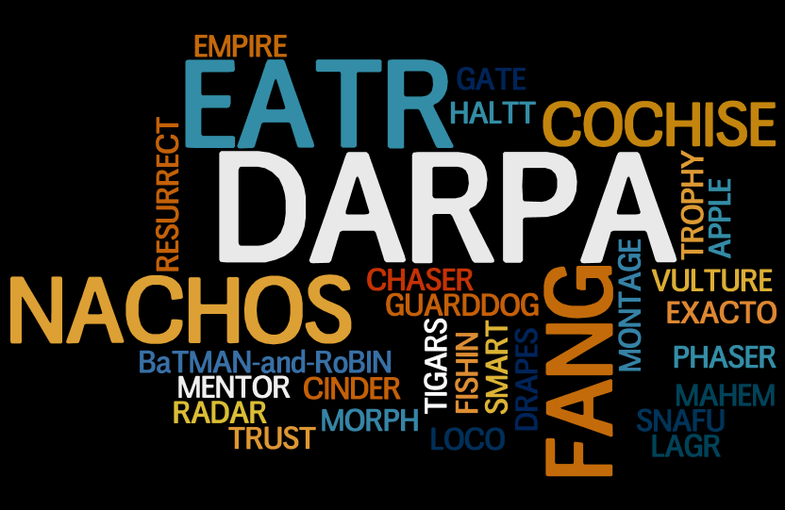 What do you call an armor-penetrating munition? MAHEM. A smokescreen that instantly closes around a tank? DRAPES. A robot that scavenges and feeds itself? EATR, of course.

At the Defense Advanced Research Projects Agency, the military’s mad-science research wing, program managers must do the seemingly impossible. Not just slow down the speed of light and make fake blood. They also have to describe these pie-in-the-sky ideas to journalists, the public and Congress.

That’s how you get some of the most amusing acronyms ever.

Check out our gallery of classic DARPA names by clicking here.

From the precursors of the Internet to the latest stealth technology, DARPA specializes in the world of the future. Speaking to members of Congress last spring, Dr. Regina Dugan, the agency director, described her cohorts as “the nation’s elite army of futuristic technogeeks.”

“We challenge existing perspectives, break glass, and make people excited and uncomfortable, sometimes with the same sentence,” she said. DARPA has six program offices, but its scientists rely heavily on partnerships with universities and private contractors, which range from behemoths like Boeing and Lockheed Martin to small firms like Robotic Technology Inc.

The projects are often deadly serious, but the acronyms are sometimes silly, descriptive, and very memorable. The best ones are a combination of all three — so says Robert Finkelstein, president of Robotic Technology Inc., maker of EATR. That’s “Energetically Autonomous Tactical Robot.” Finkelstein said he’s as proud of this name as any he’s come up with in his long acronym-heavy career, which dates to his service as an Army weapons analyst in the 1960s.

“Every once in a while, we would develop or design a new system or a concept that needed a name, and we’d try to come up with an acronym that the words would encompass what it did, and the acronym would be on point and relevant to what the system did, or some characteristic or function of the system,” he said.

It’s like playing a reverse form of Scrabble — first, Finkelstein writes down all the words that may describe the system or be relevant in some way. Then he looks at all the words’ first letters, and tries to combine them into a new word that makes sense.

“Sometimes you’re lucky and something particularly good pops out, like EATR. For something that forages and consumes vegetation, that’s the essence of its unique nature,” he said.

Armed forces acronyms and abbreviations are as old as organized militaries themselves; the ancient Greeks and Romans used them (e.g., SPQR, an albeit unpronounceable acronym for the “Senate and people of Rome”). Sometimes it’s just more convenient to make up a word, like radar, rather than say a whole phrase, like “radio detection and ranging.”

Though they may be silly, the point of acronyms is explication, says DARPA. The agency’s programs are often highly theoretical, complex or unusual, so they can be hard to explain in just a couple words, explains Eric Mazzacone, DARPA’s chief public affairs officer. He said in an e-mail that program managers seek input from their teams, and they try to come up with descriptive names.

“Due to the often lengthy nature of those descriptive names, ‘Coherently-Combined High-Power Single-Mode Emitters (COCHISE)’ for example, acronyms are typically created from those names,” he said.

Sometimes, the results are awesome names like MAHEM, for Magneto Hydrodynamic Explosive Munition, an armor-penetrating hydrodynamic metal jet straight out of Arthur C. Clarke. Fire this weapon at an enemy tank, and mayhem will ensue.

But plenty of other project names appear to be reverse-engineered to be YABA-compatible (that’s Yet Another Bloody Acronym, readers). Like RESURRECT. In 2008, DARPA started a program involving descriptions of battlefield events, medical records, autopsy results, and predictive algorithms to recreate the scene of a trauma. They called it REstoring SURvivability by REConstructing Trauma.

A dynamic dual project from last year takes the cake: BaTMAN-and-RoBIN, which stands for Biochronicity and Temporal Mechanisms Arising in Nature, and Robustness of Biologically-Inspired Networks. The program would leverage basic biology as a tool for situational awareness — kind of like some superheroes. Though absurd, these names are sort of relevant, which Finkelstein may be better than NACHOS.

“If you have the words that describe the system well, but an acronym that doesn’t mean anything or isn’t relevant to some aspect of the system, then it’s very weak,” he said. “With NACHOS, at least it’s a mnemonic way to remember the system, but it’s not as good as when it spells to some characteristic or functional ability of the system itself.”

DARPA has six branches, each of which focuses on a specific area of research. The Microsystems Technology Office, for instance, develops chip-based photonics, electronics, microelectromechanical systems and more. MTO also has some of the most fun with its project names, from ASP (Analog Spectral Processors) to TROPHY (Transmit and Receive Optimized Photonics). There are even acronyms-within-acronyms, like ChaSER (Channelized SIGINT and ELINT Receiver for UAV Applications).

Acronyms can even add heft to a project, as evidenced by the controversies that ensue when they’re changed. Last summer, Defense Secretary Robert Gates recommended renaming the country’s psychological operations — PSYOPS — to Military Information Support Operations (MISO), partly to reduce the program’s stigma. But some soldiers weren’t thrilled, commenting on various military blogs that the change directly undermined the program’s mission.

“Some of us joined Psychological Operations because it sounded awesome for its name alone,” an anonymous four-year PSYOP soldier wrote on the website Small Wars Journal. “The intimidation factor brought on by the words alone are what attracts many recruits … Maybe you should have done what a PSYOP soldier does and pre-test the name first before freaking changing it.” 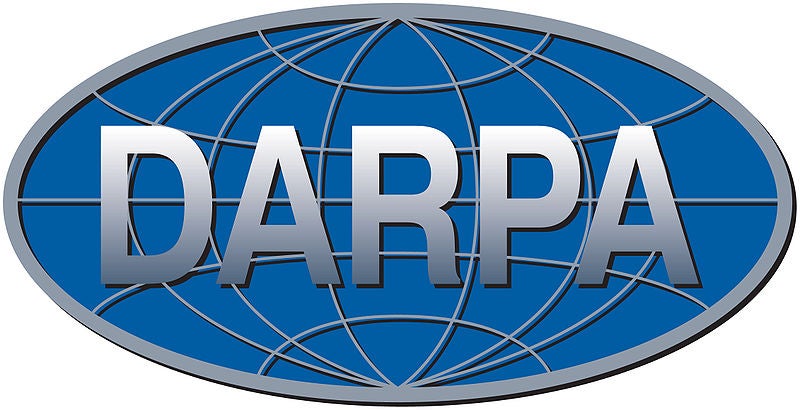 Americans have always liked acronyms and abbreviations, well before the Internet gave letter-strings like LOL and WTF entirely new meanings. The New Deal and World War II era saw a rapid increase in the use of acronyms. But nowhere are they more prevalent than in the Department of Defense. Some non-DARPA programs also have great acronyms — the Air Force’s flightless Protocol Emulation for Next Generation Wireless Networks (PENGWUN), for one.

Decades ago, Finkelstein worked on a stealth system that allowed a tank or other vehicle to be obscured by smoke at the push of a button, and he came up with the name “Dense and Rapid Protector-Emitter of Smoke.” DRAPES.

“That was also focused on what the thing did,” Finkelstein recalled, with a bit of pride. Later, he came up with “Surreptitious Hierarchical Autonomous Robotic Submarine” — SHARCS. His program managers later changed it, however. Along with continued research on EATR, he’s started developing a new concept involving a tactical ground-air robotic system called TIGARS, for Tactical Intelligence Ground-Air Robotic System.

“It involves robotic air vehicles and ground vehicles that work together to communicate in a collective. The words are descriptive, the acronym TIGARS indicates a ferocious creature, but it doesn’t quite cover the things in the air part. It’s focused on the ground stuff. Tigers don’t fly yet, so that’s not quite as good as EATR,” he said. Still, it’s pretty good.

DARPA’s sub-wavelength lasers are not only tiny, they’re nice and toasty, operating without the need for cryogenic cooling. The NACHOS team is building the smallest room-temperature lasers in the world, which could enable nanoscale laser computing systems. 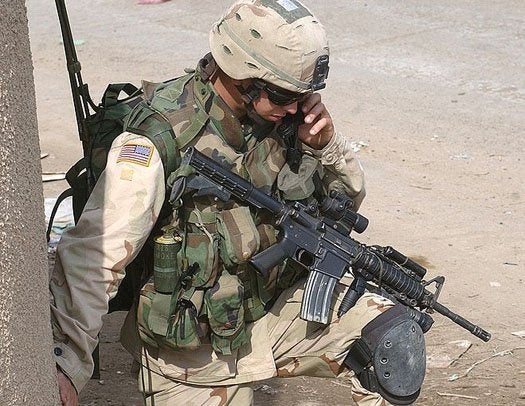 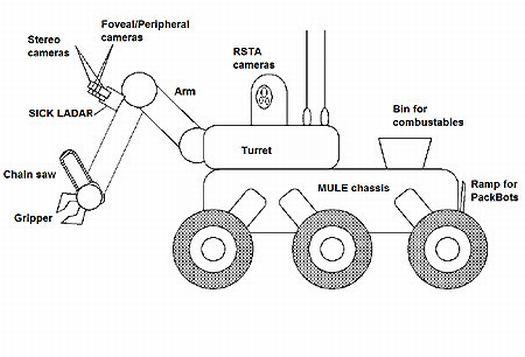 These self-sufficient Energetically Autonomous Tactical Robots could one day patrol cities or forests, foraging for their own (strictly vegetarian) sustenance. They would have a gripper-and-chainsaw arm up front for capturing and dismantling food, in the form of twigs, grass clippings, and wood chips.

In modern warfare, enemies are hard to track — would-be suicide bombers blend in with civilian populations, making it more difficult to anticipate their next moves. The Vehicle and Dismount Exploitation Radar system casts a wide net, enabling the surveillance and tracking of any ground vehicles and dismounts from a Warrior (or similar) unmanned aerial vehicle. 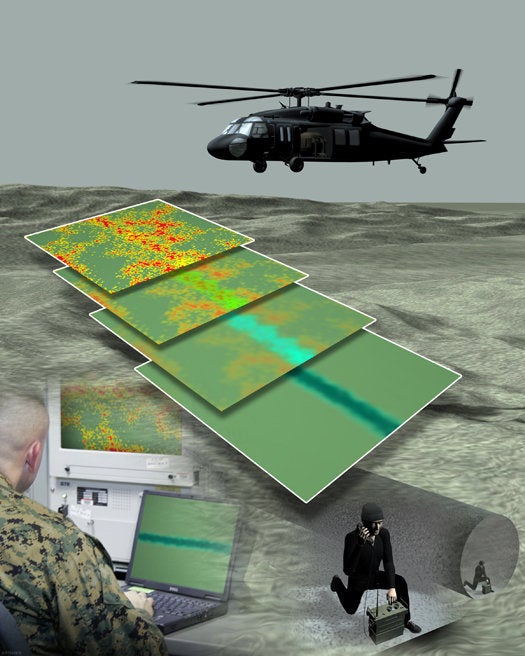 The Gravity Anomaly for Tunnel Exposure program involves an airborne sensor-based platform to map the subterranean world and identify possible threats hiding there. Lockheed Martin is developing a system that identifies underground targets by analyzing gravity signatures for the sign of man-made tunnels, bunkers, or caches. 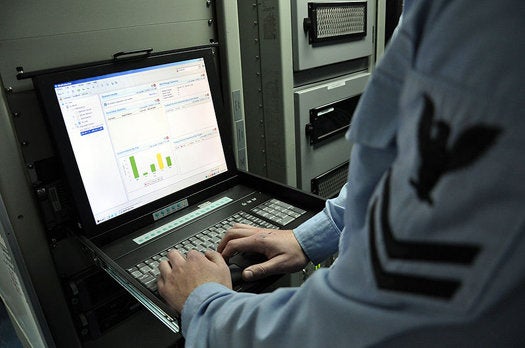 The scores of people who have been burned by the WikiLeaks diplomatic cables might like to know how their secrets got out in the first place. DARPA wants to find those leakers and stop them, so that like a burned-out cinder, they can never light fires again. The goal of DARPA’s Cyber INsiDER Threat “will be to greatly increase the accuracy, rate and speed with which insider threats are detected and impede the ability of adversaries to operate undetected within government and military interest networks,” according to the agency solicitation. 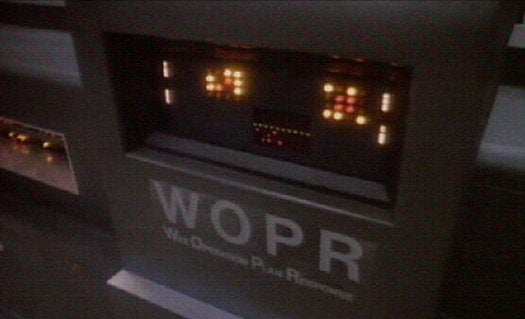 Even the most sophisticated computers are incapable of recovering after an attack, either by finding new ways to complete their tasks or by repairing themselves. The human immune system does this all the time, however. The Clean-Slate Design of Resilient, Adaptive, Secure Hosts program seeks crash-proof computers modeled after the human immune system. 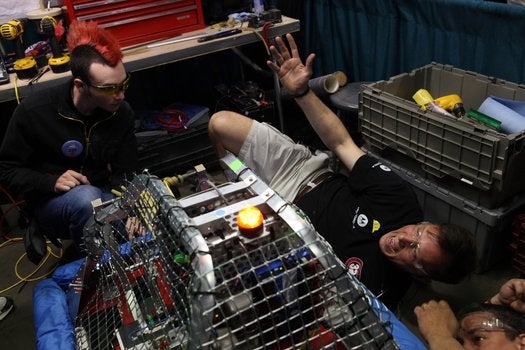 Hoping to inspire new legions of defense manufacturers, DARPA is taking high schoolers under its wing through the Manufacturing Experimentation and Outreach program. It aims to put manufacturing equipment in 1,000 high schools around the world. 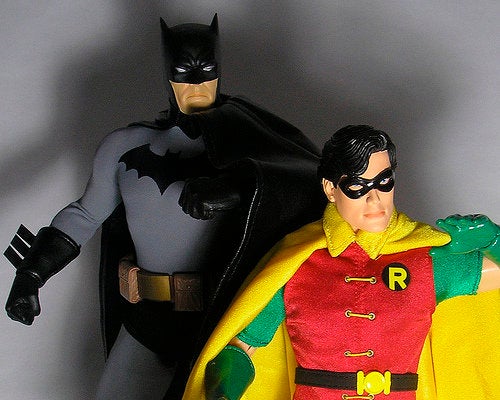 These acronyms — announced together — are such a complete and utter reach, they top our list of insane acronyms. The programs would turn basic biological principles into a tool for better situational awareness and decision-making. Contractors working on Biochronicity and Temporal Mechanisms Arising in Nature would examine micro-scale physical and biological laws — like quantum and biological clocks, physiological signal processing, and synchronized natural rhythms — and their influences on the world at large. Those studying Robustness of Biologically-Inspired Networks would explore more macro-scale characteristics of nature, like group behaviors. 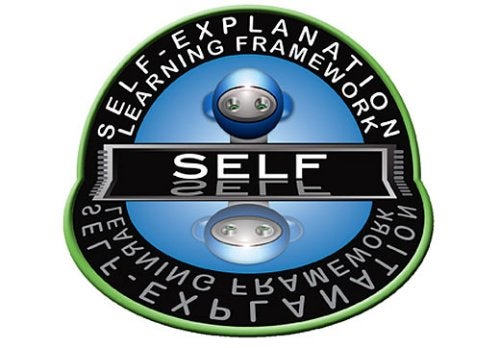 DARPA’s Self-Explanation Learning Framework (SELF) program “seeks to construct systems that can participate in their own construction.” That’s right, self-assembling robots. The system “might know the requirements for various tasks in its repertoire, and it may try to perform those tasks to verify functionality,” says DARPA. Robots might know, for instance, that they’d need laser-arms or flesh-chomping teeth to destroy humans, and they’d make sure they get those body parts before their construction was complete. In realistic terms, the program could help machines repair themselves if they were damaged.
DARPA
Military
blades
EATR
feature
lasers
names