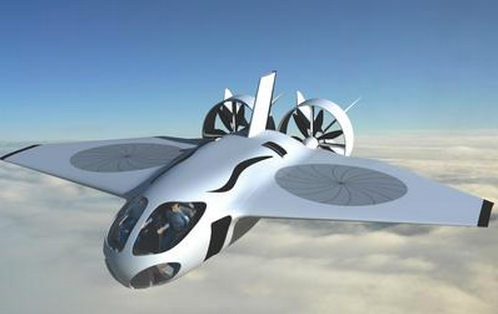 Does this illustration look a little sci-fi to you? It should: It’s a design for a plane that takes off vertically, like a helicopter, but that flies about three times faster than any helicopter today. Yes, those are rotors in the wings.

A team of graduate students from the Georgia Institute of Technology came up with the idea, which won first place at this year’s American Helicopter Society International Student Design Competition. There’s even a little PDF brochure about the aircraft, which you can browse if you feel like pretending you (and it) are in the position to buy one. The brochure suggests potential buyers might include search-and-rescue teams, the military, hospitals and corporate bigwigs.

Of course, the aircraft hasn’t been manufactured, nor will it be. The American Helicopter Society International hosts this competition to encourage engineering students to study vertical takeoff and landing. The specifications that designs must meet include that they’re able to hover without using too much fuel, fly significantly faster than helicopters today, and carry “useful loads.” The Georgia Tech craft claims to have a maximum payload of 1,741 pounds–not bad, although some helicopters can carry 5,000 pounds or more.

Want to join next year’s competition? The American Helicopter Society hasn’t put out a call for next year’s entries yet, but here’s the competition page. The competitions are usually sponsored by a different aircraft company every ear, but next year, the U.S. Army will sponsor, according to the society.