Kris Kringle’s ride is dragging him down The legend of Santa Claus isn’t complete without mentioning the “jolly old elf’s” magical means of transportation. Santa’s sleigh, pulled through the air by his high-flying reindeer, is an icon of Christmas folklore and a symbol of St. Nick’s awesome power. With his sleigh, Santa flies to every single house across the globe in a single night. That’s got to be one pretty aerodynamic toboggan, right?

Here at Popular Science, we wanted to know just how well Santa’s sleigh could travel at high altitudes. So we partnered with ANSYS, a company that specializes in virtual simulation software, and asked them to model how air would flow around the sleigh as it soars through the air on Christmas Eve. The company produced airflow simulations of two traditional versions of the sleigh, as seen in the movies Elf and The Santa Clause. The models also considered the volume of air surrounding the vehicles, as well as their velocity, which was conservatively estimated to be 150 meters per second – the speed of a commercial airplane.

The verdict was unanimous: The reindeer would have to work extremely hard to pull those clunky sleighs through the air. 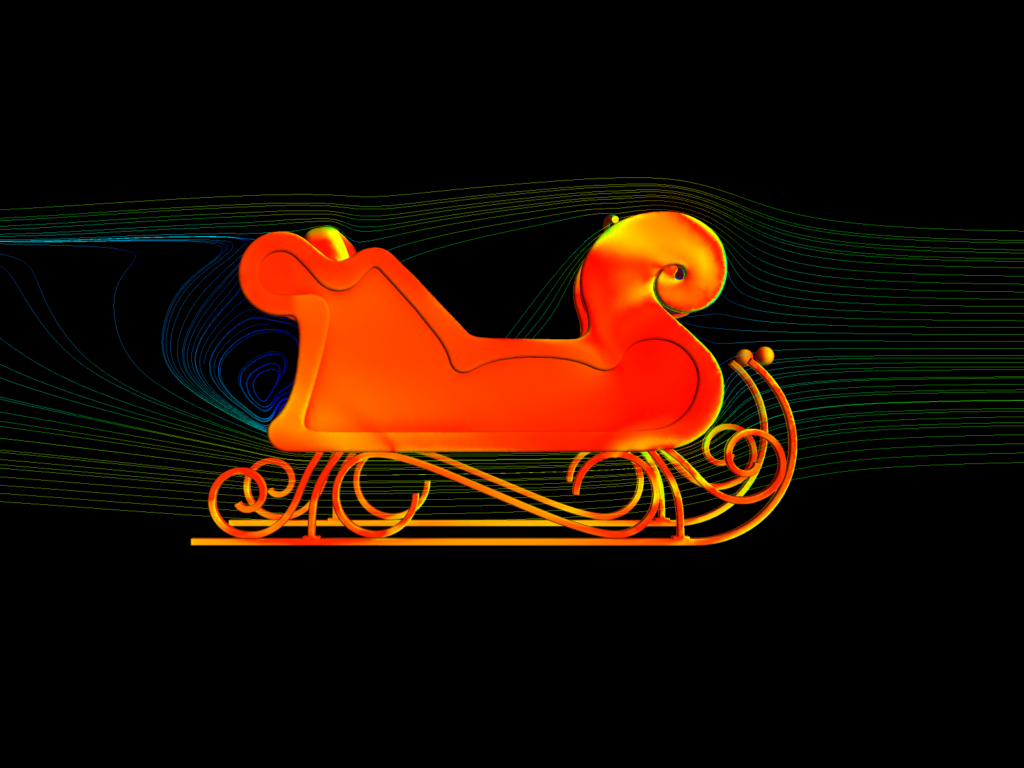 “We computed directly the drag on the sleigh – and the drag was pretty high,” Gilles Eggenspieler, the senior fluid product line manager at ANSYS, tells Popular Science. “We actually looked at the pattern of the airflow, and there’s a big area where the flow goes around the sleigh and recirculates behind it.”

Drag, often referred to as air resistance or fluid resistance, denotes the aerodynamic forces that oppose an object in motion. These forces are generated when a moving solid body comes in contact with a fluid — either a liquid or a gas. When an airplane moves through the air, every single part of the plane generates drag, making it harder for the plane to travel forward. It’s the job of the manufacturer to design the aircraft so that it generates as little drag as possible.

Santa’s sleigh has an irregular shape that makes it difficult for Father Christmas to fly efficiently through the air.

A lot of that has to do with shape. “The most aerodynamic shape in the world is a drop of rain when it’s falling,” says Eggenspieler. “The front is a very big semicircle, then it smoothly joins back in a point. You will see the same type of shape on an aircraft wing: The front is a semicircle, and then the wing tapers into a very aerodynamic form, so the airflow nicely follows the shape.”

On the other hand, shapes that are jagged or non-streamlined will create a lot of drag and resistance, since they cause the flow of air to change abruptly and push up against the object. This is why so many airplanes and cars are often curved and smooth, because the less drag a vehicle creates, the less power you’re going to need to overcome any resistance. But with Santa’s sleigh, there are a lot of changes in shape that make it difficult for Father Christmas to fly efficiently through the air. 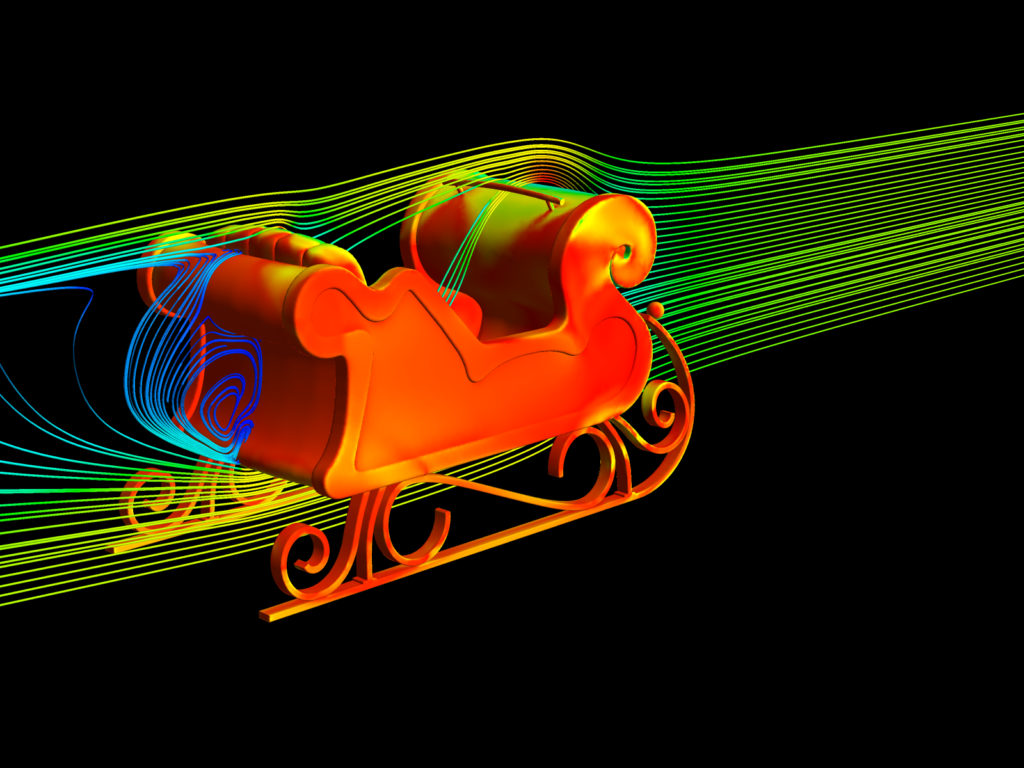 The blue lines indicate a negative velocity, meaning there’s a region of high drag behind the sleigh

In the simulation models, the lines visualize the path of the airflow around the sleigh. The air molecules flow around the shape, making their way to a region behind the object. There, the airflow actually gets sucked into the back of the sleigh and recirculates, causing a region of low pressure. “The object wants to go towards the region of low pressure, so basically the region wants to pull the sleigh back,” Eggenspieler explains.

That means Rudolph and his team must be working overtime to combat the drag created by this low-pressure area.

After discovering this, we wanted to lend these hardworking reindeer a helping hand. So we asked ANSYS to come up with their own design for Santa’s sleigh – one with a much more modern look. Keeping the teardrop shape in mind, ANSYS developed a much more smooth and sleek sleigh, resembling that of a sports car rather than Santa’s vintage getup. The smooth lines eliminate 90 percent of the drag created by the old sleigh design, allowing the air to flow more smoothly around the vehicle. In fact, the new sleigh is so aerodynamically sound that it can handle supersonic speeds. ANSYS also added a covered cockpit, so that Santa doesn’t get cold while traveling through the chilly stratosphere, as well as a stealth feature, ensuring that kids don’t spot the red-suited grandpa as he delivers their goodies. You’re welcome, Mr. Claus.

Helping Santa upgrade his sleigh is similar to how ANSYS helps car companies design the best fuel-efficient designs for their vehicles. All manufacturers want to reduce fuel consumption, but cars still need to be practical. If the best aerodynamic design is the tear drop shape, the most fuel efficient car would have no room for back seat passengers – or a trunk for that matter. Car companies have to determine a way to make their cars aerodynamic while considering all these constraints.

“That’s where simulation becomes a key tool,” says Eggenspieler. “They may have a thousand ideas and a thousand different designs; you can’t put them all to the test. But you can put that in the computer and do all the tests virtually.”

Perhaps it’s time for Santa to turn to virtual simulation. His reindeer may be less cranky in the long-run.

Check out Santa’s updated ride below: 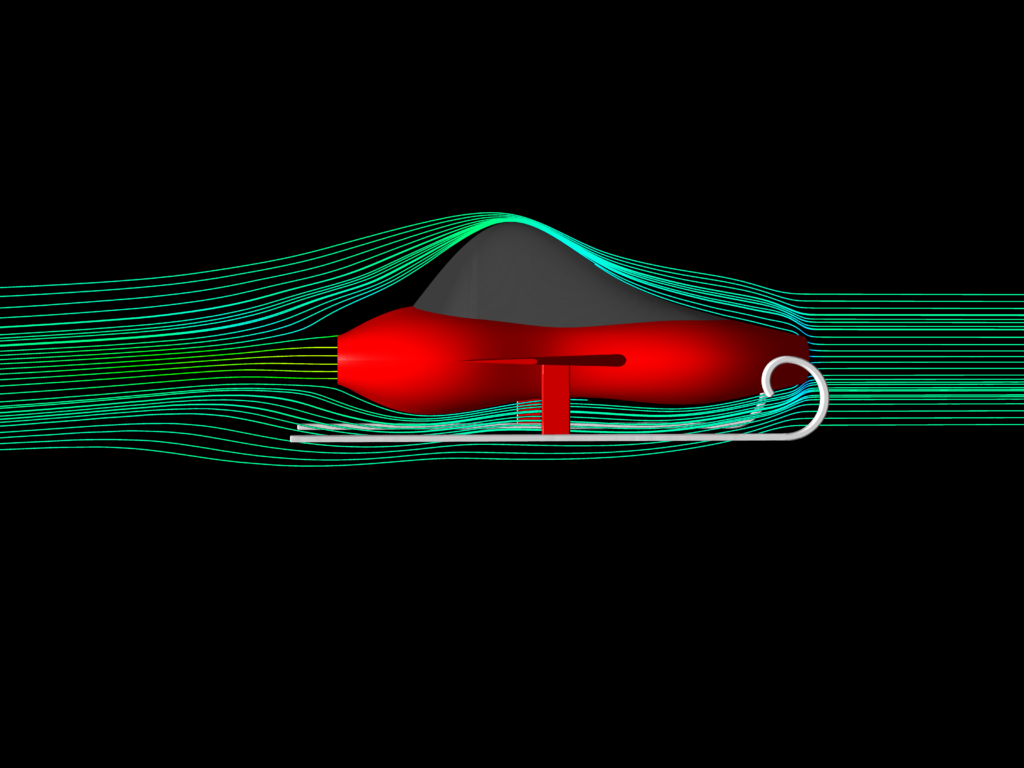 The smooth lines of the sleigh allow the air to flow easily around the vehicle. 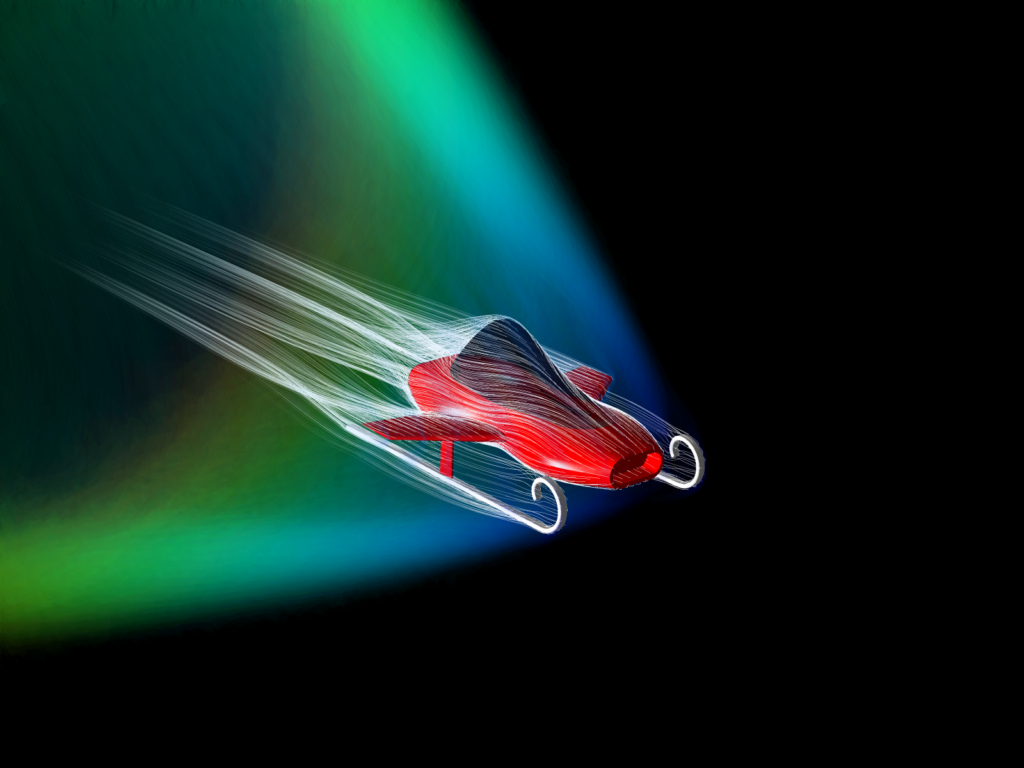 The sleigh is so aerodynamically sound that it can even break the sound barrier — and remain in one piece. Now You See Me

ANSYS even equipped with a new stealth mode feature. Now Santa will be even more mysterious than before.
airflow
ANSYS
Aviation
drag
Santa Claus