Next-Generation Gelatin Could be Derived from Humans Instead of Animals 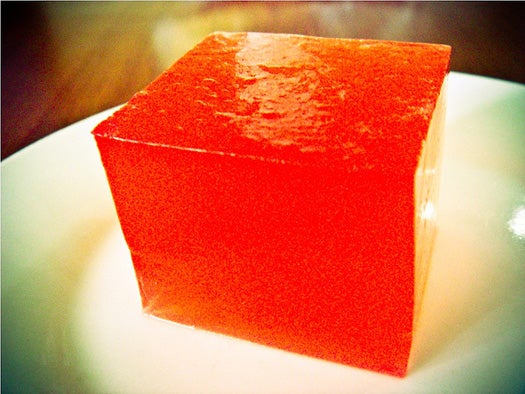 Something to reflect on over your lunch break today: Scientists are developing a new approach for producing human-derived gelatin in large enough quantities to be a commercially viable replacement for the animal-based gelatins used in all kinds of gelatin-like desserts, candies, and other foodstuffs as well as pharmaceuticals and cosmetics. Think about that next time you crack open a mid-afternoon pudding snack.

Gelatin is used as a gelling agent in all kinds of things and is generally derived from the collagen in animal bones and skin (particularly cows and pigs). Broken down, it’s just a mixture of peptides and proteins. But it’s still derived from animals, which means there is a risk, however slight, that it could provoke immune system responses in humans or carry infectious diseases. Moreover, animal gelatin can be inconsistent from batch to batch, giving headaches to quality control managers at production plants. And it’s not vegetarian.

As such, scientists have tried all kinds of ways to create a better gelatin, and they think they may have found it, right here in us. To create the human-derived gelatin, human genes are inserted into yeast strains that are tuned to produce gelatin in specific, controlled ways. That creates for a more consistent gelatin–and also a twinge of nausea.

Is consuming gelatin derived from human genes some kind of indirect cannibalism, you ask? This may be yet another aspect of the commercial food production chain that the consumer may find it most comfortable to just not think about.