With Shuttle Launches Over, Cleanup of Launch Zone Chemicals Will Take Decades and Millions of Dollars

With every ending comes a new beginning, as they say — so with the ending of the space shuttle program... 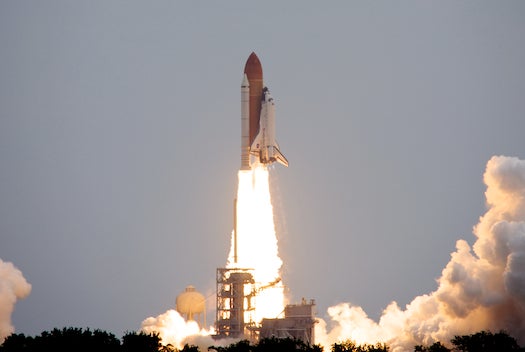 With every ending comes a new beginning, as they say — so with the ending of the space shuttle program comes the beginning of a long environmental remediation at NASA’s Florida facilities.

Five decades of spacecraft launches have taken a toll on the sandy soils beneath the Kennedy Space Center, according to a report by Florida Today. Plumes of chemicals will cost $96 million to clean up in the next 30 years, including $6 million this year.

The most common contaminant is trichloroethylene, or TCE, which was used to clean rocket engines (although not the space shuttle main engines). TCE cleans out the hydrocarbon deposits left over from burning rocket fuel, which could explode if ignited. NASA used to dump TCE straight into the ground, a practice that stopped by the mid-1970s.

As Florida Today points out, astronauts walked on the moon for the first time a year before President Nixon established the Environmental Protection Agency. So the rocket launches of the 1950s and ’60s pre-dated laws governing the toxic substances they produced.

TCE is a known carcinogen, and it persists in soil, particularly in the alkaline sands surrounding the Space Coast. NASA spends an average $8 million to $10 million a year cleaning up TCE and other hazards.

In all, there are apparently 267 known contaminated sites at KSC, 141 of which have been cleaned up. The rest are in various stages of assessment or remediation, Florida Today reports. Solvents and a host of flame retardants, arsenic and nickel penetrate the soils surrounding Launch Pad 39B, the main shuttle pad, the site reports. NASA is developing new methods to clean it up.

And this is just ground contamination — air pollution is a whole different story. Last year, a study examining private spaceflight found the tourism industry could dump large amounts of black carbon into the atmosphere, where it would change atmospheric conditions and potentially worsen global warming.

Apparently, humans leaving the Earth is not very good for its health.