Gravity probe experiment used the most perfect spheres ever created 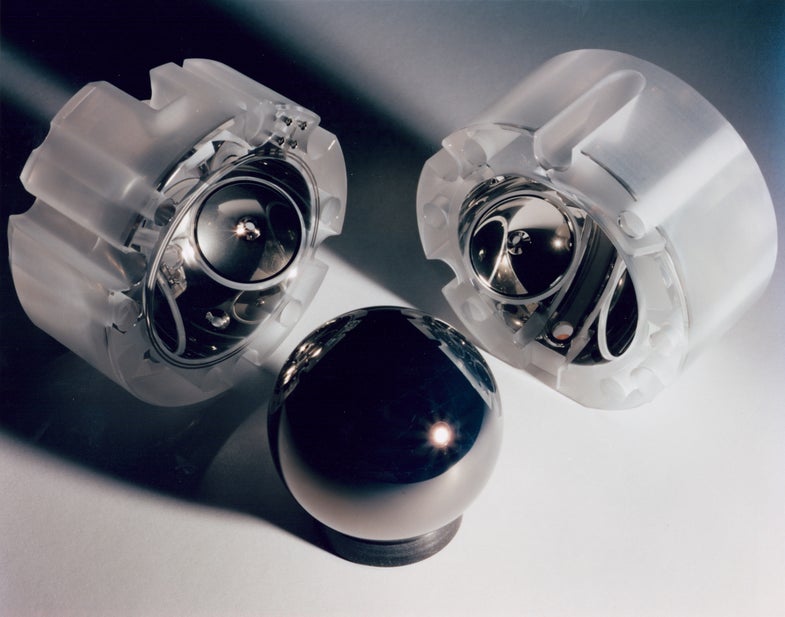 Like a beach chair sagging under a sunbather’s weight, the fabric of spacetime does indeed warp around the mass of the Earth — just as Albert Einstein predicted. And like a swimmer moving through the water, the rotation of the Earth affects the movement of spacetime itself. A gravity probe whose origins date to the era before human spaceflight has finally proved general relativity right, according to NASA.

The Gravity Probe-B measured the geodetic effect, the amount that Earth warps the space and time in which it sits, and frame-dragging, or the extent that Earth’s rotation churns spacetime around with it.

Einstein’s theories of relativity hold that space and time are woven together into a four-dimensional fabric, and that a weighty body like a planet or a star depresses that fabric, like someone sitting on a chair or a trampoline. Gravitational attraction is really just objects following the warped path.

What’s more, the rotation of a massive body would also affect the fabric, so that a distant observer would perceive objects close to a gravitational body as being dragged around. Think of Earth sitting in a vat of liquid — as the planet rotates, the liquid starts to swirl, too, and so does everything near the Earth.

If this is true, the axis of a gyroscope would change when compared to the light from a faraway star. This is what GP-B was designed to do.

Orbiting 400 miles above the Earth in a polar orbit, GP-B contains four gyroscopes made of quartz-silicon spheres that are considered nearly perfect — they’re in the Guinness Book of World Records. It has a telescope that stared at a single star, IM Pegasi, while the satellite made its rounds. If the Earth’s mass did not affect spacetime, the gyroscopes would point the same direction forever. But they didn’t, experiencing teeny but measurable changes in the direction of their spin. This is exactly what Einstein predicted back in 1916. 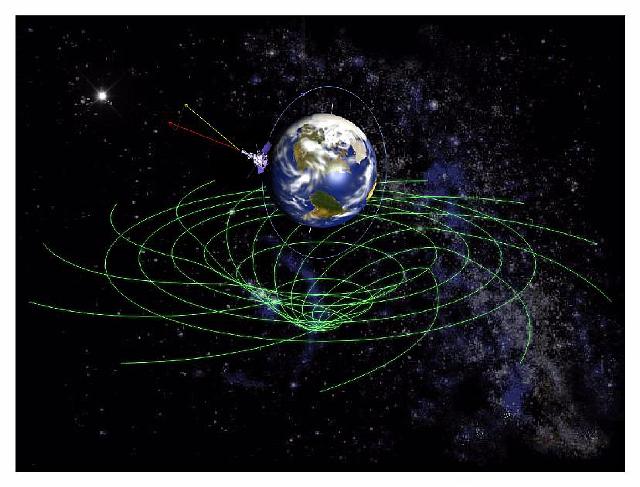 Gravity Probe-B and the Geodetic Effect

For those who are interested, it measured a geodetic precession (spacetime depression) of 6.600 arcseconds, plus or minus 0.017, and a frame-dragging effect of 0.039 arcseconds, plus or minus 0.007, according to lead researcher Francis Everitt at Stanford University. An arcsecond is 1/3600th of a degree. The satellite’s precision is thus equivalent to measuring the thickness of a sheet of paper edge-on from 100 miles away, according to an email from NASA. The calculations, published online in Physical Review Letters, mesh with Einstein’s predictions.

Scientists are calling it an “epic result,” and NASA announced the news at a press conference today. The success is despite the many twists and turns GP-B has experienced in its long life, from conception in 1959 to its eventual launch in 2004. It required new innovations along the way, including technology that can reduce drag, temperature fluctuations and magnetic influences on orbiting satellites. GP-B technologies are used in GPS equipment and were used on NASA’s Cosmic Background Explorer mission, which determined the cosmic microwave background. After finally launching in 2004, GP-B ran out of funding in 2008 before researchers in Saudi Arabia stepped in.

GP-B’s legacy will be this verification of relativity, said Clifford Will, a relativity expert at Washington University in St. Louis.

“One day this will be written up in textbooks as one of the classic experiments in the history of physics,” he said.