A Long Exposure Captures Bioluminescence Below, a Swirling, Starry Night Above

This image would be cool enough if it were some kind of artistic fabrication, but the fact that it’s a... 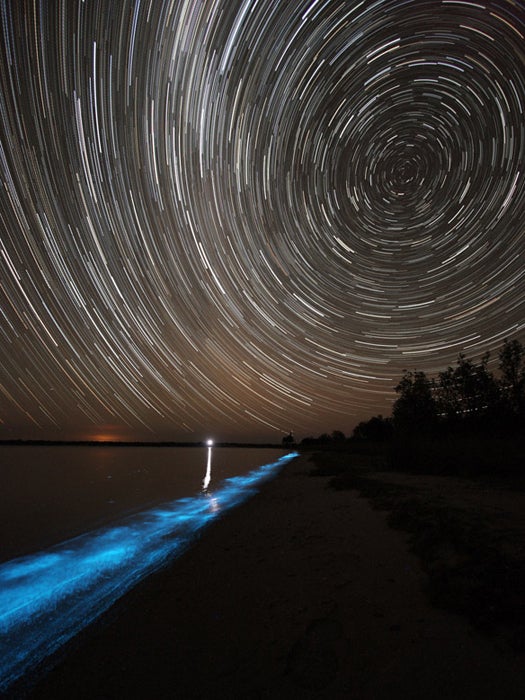 This image would be cool enough if it were some kind of artistic fabrication, but the fact that it’s a real photograph is nothing short of amazing. Capturing more than one brand of nocturnal illumination, photographer Phil Hart snapped this image (and a gallery of other pics) at Gippsland Lakes in Victoria, Australia, displaying both the cosmic light above the water and the bioluminescent algae below.

Judging from his gallery, Hart has been shooting these bioluminescent protists for a few years now, since wildfires in Victoria that began in 2006 set off a mulit-year chain reaction in the local ecosystem that eventually led to these Noctiluca scintillans algae thriving in the Gippsland Lakes. This particular shot was captured via an hour-and-a-half exposure that reveals the rotation of the stars in the southern sky and the trillions of Noctiluca scintillans glowing in the water.

Hart tells the full story of his fascination with and capturing of these bioluminescent organisms on his website, which we highly recommend checking out if not for the back story then for the impressive collection of biologically (and astronomically) pretty pics. Like this one.