If you’ve got a lust for space travel, a desire to go where only a couple of dozen people have... 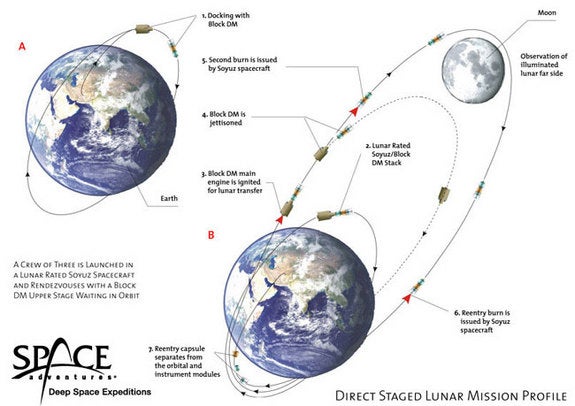 If you’ve got a lust for space travel, a desire to go where only a couple of dozen people have gone before, and $150 million to spare, Space Adventures needs you. The space tourism company–it’s the one that organizes the ISS trips via the Russian Soyuz–has mapped a potential tour around the moon that could lift off within five years. But until it sells the second seat, the mission will remain grounded.

That’s right, the second seat. The company has already secured a nine-digit commitment from one customer for a potential lunar sightseeing tour. And the logistics are already in place as well: aboard a three-seat Russian Soyuz spacecraft (the third seat is for a Russian mission commander), the tourists would launch into orbit where they would rendezvous with a separately-launched unmanned rocket, which would jet them the rest of the way to the moon.

Alternatively, the Soyuz might stop at the ISS before making its rocket rendezvous, depending on a variety of factors (like how much money you’re willing to shell out, for one). Round trip: eight or nine days.

The Soyuz wouldn’t land tourists on the moon obviously, but it would circle it at an altitude of just 62 miles at minimum, providing that up-close view of the cratered lunar surface and that storied Earthrise that thus far has only been witnessed by 24 people.

Of course, first you have to get the money together. Space tourists to the ISS have paid between $20 million and $35 million for the privilege. That $150 million price tag mentioned above isn’t absolutely fixed, but even as a ballpark figure it dwarfs the already astronomically high price of previous space tourism. But if you’re the kind of person that can reasonably drop $150 million on vacation, you’re probably not going to quibble over a few million more.