An Amazing Pic of Discovery Docking with the ISS, Taken from Earth

This is an image of the Space Shuttle Discovery taken from the ground, no easy feat in itself. But it... 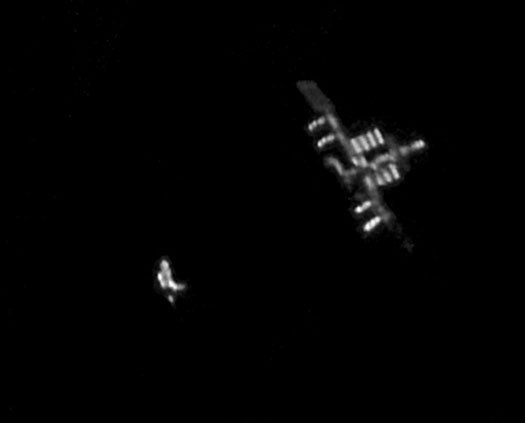 As seen from the ground. Rob Bullen via [Bad
SHARE

This is an image of the Space Shuttle Discovery taken from the ground, no easy feat in itself. But it wasn’t taken by an observatory or a massive scientific instrument. Rob Bullen snapped this image from the UK using an 8.5″ telescope. That he was guiding by hand.

By hand? Yes, Bullen was operating his telescope by hand rather than via carefully calibrated electronic equipment that one might expect an astrophotographer to be using. On Saturday he took his telescope–a relatively tiny setup as far as space telescopes are concerned–outside under a somewhat overcast sky, figured out where to point his rig (by hand), and just like that the sky cleared up, the ISS appeared, and the image was captured.

The ISS isn’t so hard to see from the ground–it’s well more than 300 feet long these days–but it is moving really, really quickly (like 17,000 miles per hour quickly). Cheers to Bullen for giving confidence to amateur astrophotographers everywhere.