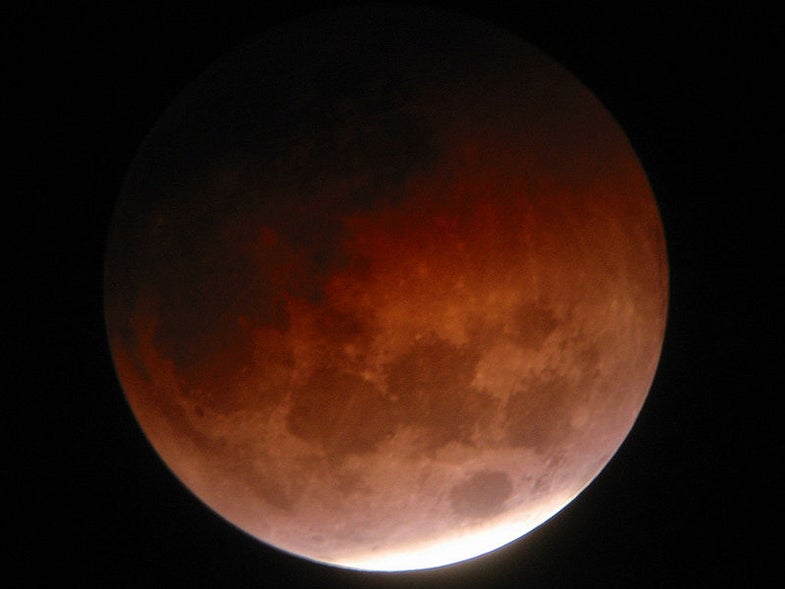 For the first time since 1638, a total lunar eclipse will be visible from North America on the longest night of the year. That night just happens to be tonight, starting at 1:32 AM, so all you moon-oglers will have to stay up awfully late (or wake up perversely early) to catch it.

The eclipse, in which the Earth’s shadow completely blocks out the moon, will last for a particularly long time tonight–it will start at 1:32 AM (Eastern Time), with the total eclipse beginning at 2:41 AM. (West coasters can do the time zone math themselves, and watch the eclipse in shorts with their movie star neighbors on the beach, or whatever they do out there.)

The total eclipse will last for a whopping 72 minutes, until 3:53 AM, during which the moon will appear to change colors, most noticeably to bright orange-red. But do not be alarmed! The moon is not on fire, functioning as some kind of pagan punishment to celebrate the winter solstice. It’ll be changing colors due to the light filtering through Earth’s atmosphere and reflecting on the moon’s dull surface.

For their part, NASA will be hosting a live chat with Marshall Center astronomer Rob Suggs and researcher Mitzi Adams, and will also host a live feed, in case you live in a dungeon or something and can’t see the moon (in which case, you should really look into moving once your dungeon’s lease is up).