How Nuclear Reactors Work, And How They Fail

Several of Japan's nuclear power plants are experiencing serious damage from the earthquake and ensuing tsunami. Here's what you need to know to understand the news, as it happens 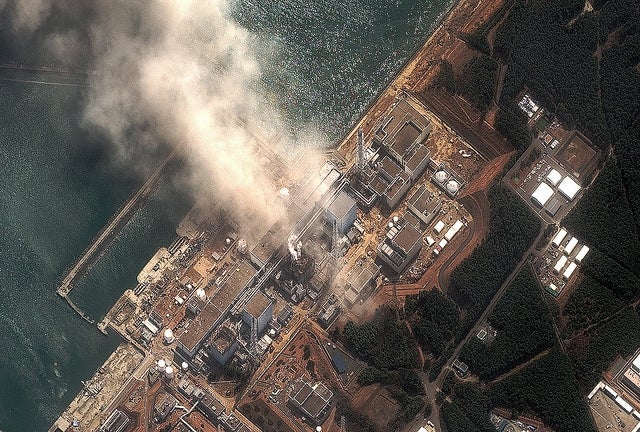 Several of Japan’s nuclear power plants, especially the Fukushima Naiishi plant in northeastern Japan, are experiencing serious problems in the wake of Friday’s earthquake and tsunami. If you’ve been following the news, you’ve seen some pretty alarming stuff going on at this plant–terms like “explosion,” “partial meltdown,” “evacuation,” and “radiation exposure.” With details sparse from the chaotic scene, here’s what you need to know to understand and make sense of the news unfolding in Japan.

What Is a Nuclear Reaction?

A nuclear reaction is at its most basic nothing more than a reaction process that occurs in an atomic nucleus. They typically take place when a nucleus of an atom gets smacked by either a subatomic particle (usually a “free neutron,” a short-lived neutron not bound to an existing nucleus) or another nucleus. That reaction produces atomic and subatomic products different from either of the original two particles. To make the kind of nuclear reaction we want, a fission reaction (in which the nucleus splits apart), those two original particles have to be of a certain type: One has to be a very heavy elemental isotope, typically some form of uranium or plutonium, and the other has to be a very light “free neutron.” The uranium or plutonium isotopes are referred to as “fissile,” which means we can use them to induce fission by bombarding them with free neutrons.

In a fission reaction, the light particle (the free neutron) collides with the heavy particle (the uranium or plutonium isotope) which splits into two or three pieces. That fission produces a ton of energy in the form of both kinetic energy and electromagnetic radiation. Those new pieces include two new nuclei (byproducts), some photons (gamma rays), but also some more free neutrons, which is the key that makes nuclear fission a good candidate to generate energy. Those newly produced free neutrons zoom around and smack into more uranium or plutonium isotopes, which in turn produces more energy and more free neutrons, and the whole thing keeps going that way–a nuclear fission chain reaction.

Nuclear fission produces insane amounts of energy, largely in the form of heat–we’re talking several million times more energy than you’d get from a similar mass of a more everyday fuel like gasoline.

Getting Usable Energy From Fission

There are several types of nuclear fission reactors in Japan, but we’re going to focus on the Fukushima Naiishi plant, the most hard-hit facility in the country. Fukushima, run by the Tokyo Electric Power Company (TEPCO), has six separate reactor units, although numbers 4, 5, and 6 were shut down for maintenance at the time of the earthquake (and more importantly, the subsequent tsunami). Numbers 1, 2, and 3 are all “boiling water reactors,” made by General Electric in the early- to mid-1970s. A boiling water reactor, or BWR, is the second-most-common reactor type in the world.

A BWR contains thousands of thin, straw-like tubes 12 feet in length, known as fuel rods, that in the case of Fukushima are made of a zirconium alloy. Inside those fuel rods is sealed the actual fuel, little ceramic pellets of uranium oxide. The fuel rods are bundled together in the core of the reactor. During a nuclear fission chain reaction, the tubes heat up to extremely high temperatures, and the way to keep them safe turns out to also be the way to extract useful energy from them. The rods are kept submerged in demineralized water, which serves as a coolant. The water is kept in a pressurized containment vessel, so it has a boiling point of around 550 °F. Even at such a high boiling point, the burning hot fuel rods produce large amounts of steam, which is actually what we want from this whole complicated arrangement—the high-pressure steam is used to turn the turbines on dynamos, producing electricity. 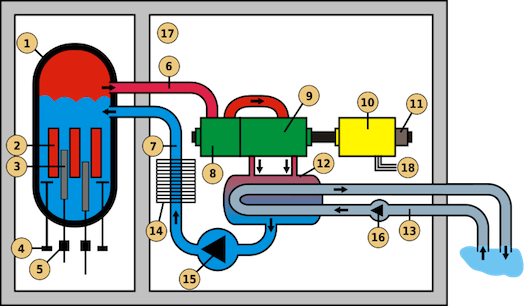 Since lots of heat is being produced, as well as the production and use of lots of pretty nasty radioactive materials, nuclear plants employ a variety several safety efforts beyond simply the use of the cooling water (which itself is backed up by redundant diesel generators–more on that later). The plant’s core, the fuel rods and the water, is encased in a steel reactor vessel. That reactor vessel is in turn encased in a giant reinforced concrete shell, which is designed to prevent any radioactive gases from escaping.

Isn’t There an “Off” Switch?

Sure! But needless to say, safely shutting down and controlling a nuclear reactor is not at all as simple as unplugging a rogue kitchen appliance. This is due to the extreme heat still present well after fission has subsided–mostly due to chemical reactions inherent in the fission reaction.

A functioning fission plant employs a system of control rods, essentially structures that limit the rate of fission inside the fuel rods by absorbing roaming free neutrons. The rate of fission can be controlled–even stopped–by inserting and removing the control rods in the reactor. At the time of the quake, the Fukushima reactors’ control rods functioned normally, shutting down the fission reaction. But even with the fission reaction stopped, the fuel rods remain at extremely high temperatures and require constant cooling.

Which isn’t typically a problem, so long as the cooling system (and, failing that, its diesel-powered backup) is still intact. But after losing main power in the quake, the subsequent tsunami wave also destroyed Fukushima’s diesel backup generators. Which is a serious problem; even though the fission had stopped, coolant is still very much required to keep the plant safe.

That’s due to the heat that remains in the nuclear core, both from the recently-disabled but still-hot fuel rods and from the various byproducts of the fission process. Those byproducts include radioactive iodine and caesium, both of which produce what’s called “decay heat”–residual heat that is very slow to dissipate. If the core isn’t continuously cooled, there’s still more than enough heat to cause a meltdown long after it’s been “turned off.”

In the case of the Fukushima plant, with both the main and backup coolant systems down for the count, TEPCO was forced to rig a method to flood the core with seawater laced with boric acid (the boric acid to stave off another fission reaction if one were to restart due to a meltdown–more on that below). That’s a bad sign–it’s a last-ditch effort to prevent catastrophe, as the salt in the seawater will corrode the machinery. It’s also a temporary fix: TEPCO will need to pump thousands of gallons of seawater into the core every day, until they can get the coolant system back online. Without it, the seawater method might have to go on for weeks, even up to a year, as the decay heat slowly subsides.

First of all, a “meltdown” is not a precisely defined term, which makes it fairly useless as an indicator of what’s going on. Even the terms “full meltdown” and “partial meltdown” are pretty unhelpful, which is partly why we’ve written this guide–you’ll be able to understand what’s actually happening without relying on spurious terms that the experts themselves are often loathe to use.

Anyway, let’s start at some of the less severe (though still unsettling) things that can happen when the coolant liquid is no longer present in the core. When the fuel rods are left uncovered by water, they’ll get far too hot–we’re talking thousands of degrees Celsius here–and begin to oxidize, or rust. That oxidation will react with the water that’s left, producing highly explosive hydrogen gas. This has already happened in reactor No. 1 at Fukushima (see the video below). The hydrogen gas can be vented in smallish doses into the containment building, but if they can’t vent it fast enough, it’ll explode, which is exactly what happened at reactor No. 1. Keep in mind, this is not a nuclear reaction, but a simple chemical explosion that often (as in this case) results in little or no radioactive material being leaked into the outside world.

TEPCO has announced that after the explosion, radiation levels in the area around the plant were still within “normal” parameters. This is an important distinction–not to say that a hydrogen explosion at a nuclear plant is particularly fun news, but it is not nearly as panic-inducing as a meltdown.

What people mean when they say “meltdown” can refer to several different things, all likely coming after a hydrogen explosion. A “full meltdown” has a more generally accepted definition than, say, a “partial meltdown.” A full meltdown is a worst-case scenario: The zirconium alloy fuel rods and the fuel itself, along with whatever machinery is left in the nuclear core, will melt into a lava-like material known as corium. Corium is deeply nasty stuff, capable of burning right through the concrete containment vessel thanks to its prodigious heat and chemical force, and when all that supercharged nuclear matter gets together, it can actually restart the fission process, except at a totally uncontrollable rate. A breach of the containment vessel could lead to the release of all the awful radioactive junk the containment vessel was built to contain in the first place, which could lead to your basic Chernobyl-style destruction.

The problem with a full meltdown is that it’s usually the end result of a whole boatload of other chaos–explosions, fires, general destruction. Even at Chernobyl, which (unbelievably, in retrospect) had no containment building at all, the damage was caused mostly by the destruction of the plant by explosion and a graphite fire which allowed the corium to escape to the outside world, not the physical melting of the nuclear core.

Over the weekend, Chief Cabinet Secretary Yukio Edano somewhat hesitatingly confirmed a “partial” meltdown. What does that mean? Nobody knows! The New York Times notes that a “partial” meltdown doesn’t actually need to have any melting involved to qualify it as such–it could simply mean the fuel rods have been un-cooled long enough to corrode and crack, which given the hydrogen explosion, we know has already happened. But we’d advise against putting too much stock in any term relating to “meltdown”–it’ll be much more informative to find out what’s actually going on, rather than relying on a vague blanket term.

As TEPCO grapples with the damage the earthquake and tsunami did to the nuclear system, there’s going to be lots of news–there could be more explosions, mass evacuations, and more “meltdowns” of one kind or another. All we can do is learn about what’s going on, think calmly about the situation, and hope that TEPCO can eventually regain control of the plants.