That's more than the land mass of the United States 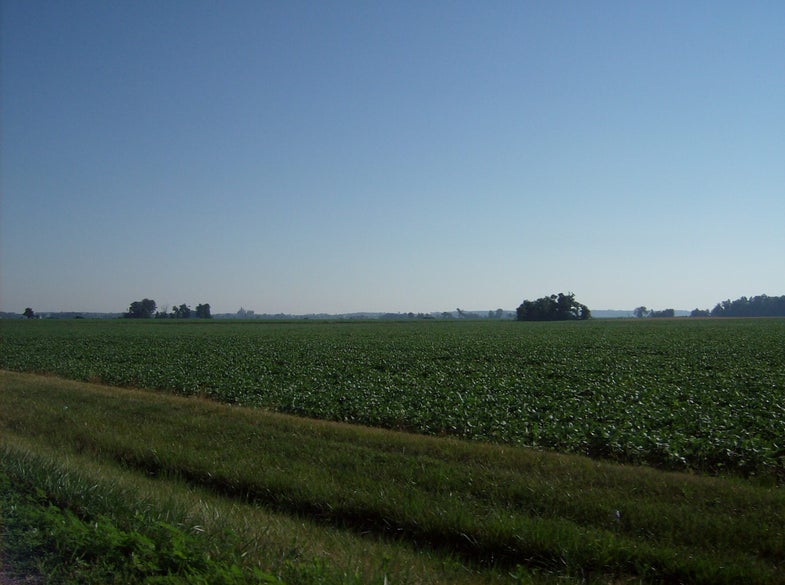 In the past 15 years, more than a billion hectares — an area greater than the land masses of China or the United States — have been cultivated with genetically engineered crops, according to an industry study. Biotech crop cultivation increased 87-fold between 1996 and 2010, making transgenic crops the fastest-adopted crop technology in the history of modern agriculture. Biotech advocates say it shows genetically modified agriculture is here to stay.

Worldwide in 2009, genetically modified crops were growing on 148 million hectares of land, or about 571,400 square miles. The area of worldwide farmland used for growing genetically engineered crops grew by 10 percent last year, according to the International Service for the Acquisition of Agri-biotech Applications, which is partly funded by the biotech industry. The 1 billion figure comes from adding up all the land mass that has ever been cultivated with GM crops since their introduction in 1996.

Roughly half those crops have been planted in the U.S., followed by Brazil and Argentina, the ISAAA study said. Developing countries are adopting biotech crops at a faster rate than industrialized countries, however. India had 9.4 million hectares last year, China had 3.5 million, and Pakistan had 2.4 million.

About 375,000 farmers in Burma planted GM cotton for the first time, growing seed that had been modified to produce a bacterial toxin that is deadly to pests. In all, about 15.4 million farmers planted biotech crops last year, and the ISAAA says more than 90 percent of them are poor farmers in developing countries.

Critics point out that 1 billion hectares (or 3.86 million square miles, or 2.47 million acres) is only equivalent to about 10 percent of the world’s arable land, however, so it’s not like the entire planet is embracing GM technology. They also note that developed countries — other than the U.S. — have been reluctant to adopt transgenic crops. Last year, total biotech acreage fell in the European Union.

The vast majority of the world’s genetically modified crops have been designed to resist pests or survive proprietary herbicides, and just four lucrative crops — canola, corn, soy and cotton — dominate the market. There are no commercialized biotech crops for poor countries, at least not yet.

Clive James, chairman and founder of the ISAAA, said the next four years will see biotech crops with value-added traits and biotech versions of cassava, sweet potato and groundnut, common in some of the poorest places on Earth. Drought-tolerant corn is expected to be introduced in 2012, and golden rice, a strain of rice enriched with vitamin A, will be available to farmers in the Philippines in 2013, followed by Bangladesh, Indonesia and Vietnam.