From harvesting energy to building networks, nature has been solving problems for billions of years longer than humans have 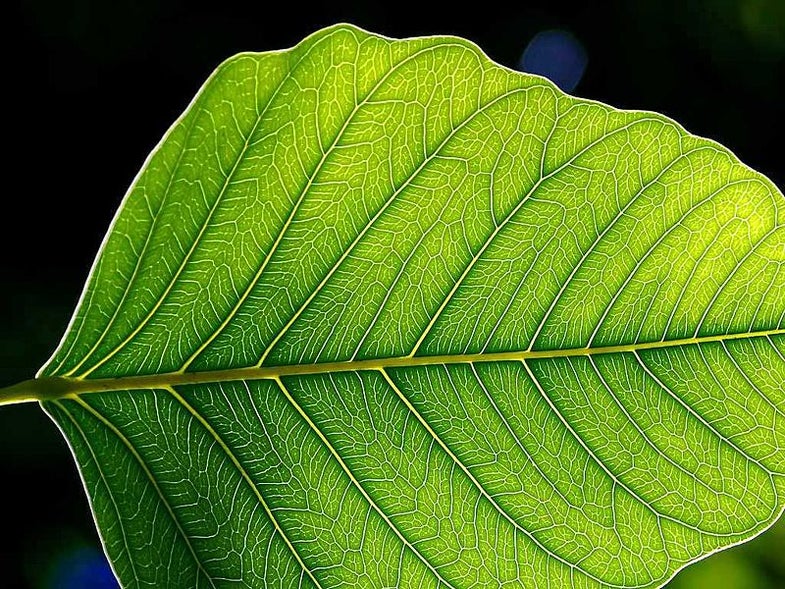 How exactly does one turn sunlight and water into usable energy? If it were possible to ask any living organism on Earth this question, you could do far better than asking a biologist or a chemist, or any other human being for that matter, and take the question directly to a leaf. That’s the goal of biomimicry: to take human problems and ask nature “how would you solve this?” And increasingly, such questions are changing everything, from energy to information technology to the way we build cities.

To see how a leaf works its magic, look no further than Dr. Daniel Nocera’s lab at MIT. Yesterday, Nocera’s team announced that it has created the first practical “artificial leaf”, a synthetic silicon device that splits water into oxygen and hydrogen for fuel cells using sunlight just as a natural leaf does. Nocera’s leaf isn’t a perfect mimic of photosynthesis–for instance, it requires materials like nickel and cobalt that must be extracted from the earth, and catalysts that spur reactions that otherwise wouldn’t happen on their own. But it’s indicative of a growing shift in how humans solve big problems by looking to nature for elegant solutions rather than bending the natural world to their wills.

With its 4.5-billion-year head start on mankind, the natural world has developed some clever mechanisms for solving big problems, and that natural cleverness isn’t just informing new ways to generate energy. It’s slowly but surely informing everything from the the way emergency rooms are designed to how data networks communicate. It asks that electricity grids act like bees and businesses manage resources like coral reefs manage calories. Seriously.

“Biomimicry is a beautiful way of framing the design process to be cognizant of how nature does things,” says Dr. John Warner of the Warner Babcock Institute for Green Chemistry. “I think that over the centuries humans have become a little egotistical in trying to bend materials and things to our will.”

Warner and his colleagues are on the science side of biomimicry’s collaboration between biology and design. As a green chemist, he and his lab develop new environmentally benign materials often borrowing from natural processes along the way. In Warner’s world, gone are the heat, high pressures, and toxic additives native to much man-made chemistry, replaced with processes that hew more closely to the way nature creates materials.

On the other side of that equation are the engineers looking for new and better materials with which to design. And increasingly there’s a stronger dialogue between the two, driven partially by an increased environmental consciousness but moreso by a pressing imperative to solve big, overarching problems at the macro scale.

Take Nocera’s leaf for instance: in light of an always-looming global energy (and environmental) crisis, a means to generate electricity from plentiful (and renewable) water and sunlight could solve a number of huge problems, both natural and man made. The answer is right there in the leaf, and has been for millennia–unlock that natural mechanism in a feasible, economically viable manner and you’ve got a beautiful solution to problems ranging from the environmental to the humanitarian to the geopolitical.

“When you think about the natural world, nature outperforms us in its diversity, in its complexity, but does so at ambient temperature, at low pressures, using water for the most part as a solvent.” Warner says. By helping humans to think more like a leaf (or an ant hill, or a 1,200-year-old oak, or a bacterial colony), biomimicry is tapping that multi-billion-year head start to bring the same kind of complexity and diversity to human invention.

Click through to the gallery to see six ways bio-inspired solutions are reshaping the world in the 21st century. 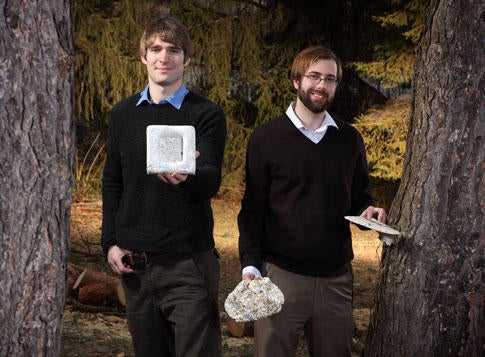 Materials: Rewriting the Story of Stuff

“Biomimetic materials have the potential to rewrite our story of stuff,” says Tim McGee, Senior Biologist at the Biomimicry Group. “For most of the materials we use today we’re mining either ore or oil, we transport them, we heat them, we machine them and then they usually have products baked into them that are slightly toxic or not benign. That’s completely different than the way natural systems use materials.” Nature, McGee says, uses materials that are readily available nearby and does so in a way that when they’re no longer needed they can be broken down into their component parts and used again. It’s not a novel concept. New York-based Ecovative “grows” packaging materials, plastics (living polymers), and building insulation from things like mycelia (basically mushroom roots). The industrial input: agricultural byproducts like buckwheat husks and cotton seed hulls–no harsh chemicals, no global supply chain of raw materials (pictured are Eben Bayer [left] and Gavin McIntyre of Ecovative with their mushroom-based material). By looking to ecosystems as a model, we could reorganize our entire supply chain of “stuff” by using biomimetic materials that are sourced locally and manipulated into essentially whatever we want them to be without harsh chemical processes. How? McGee sees huge potential in tweaking 3-D printing tech to be more bio-friendly. “Right now rapid 3-D printing uses these plastics and metals and other things we already know how to work with,” he says. “I think biomimicry could completely change that story by having those rapid prototyping materials be bio-inspired and really perform in a way that we’ve never seen materials perform.” 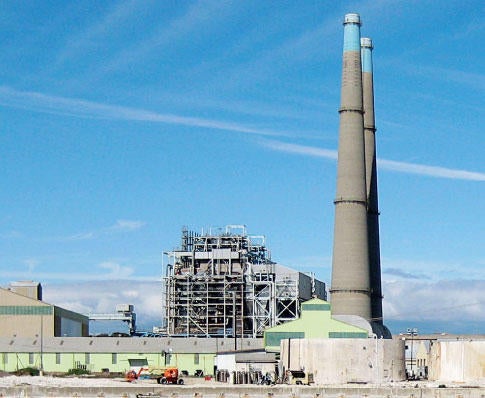 Nature provides a blueprint for smart, efficient systems that has been largely overlooked or ignored by those who organize our population centers. There is plenty to be considered in the way certain coastal oaks gird themselves against hurricane winds or in the way desert plants make the most efficient use of scarce rainfall, but those are piecemeal solutions to individual problems. McGee is more interested in the wholesale re-imagining of the modern burg via “generous cities” that don’t just feed off their environments, but instead give back to their surroundings. “Imagine a city where the water leaving the city is cleaner than that coming in, or a city that literally breathers carbon dioxide in to make products,” McGee says. “Or imagine if a city actually increases the biodiversity of a region or facilitates that happening in some way. All of that is possible, and people are working on it.” Look no further than Calera, a California company that is successfully sequestering carbon dioxide in concrete by emulating sea coral. Rather than heating limestone to create concrete (and lots of carbon dioxide), Calera is mixing mineral rich seawater with power plant emissions in a process that causes the calcium in the water to bond with the carbon in the emissions to form cement. The emissions from the power plant are thus sequestered in the concrete that growing cities are built from (Calera’s Moss Landing, Calif., pilot plant is pictured). 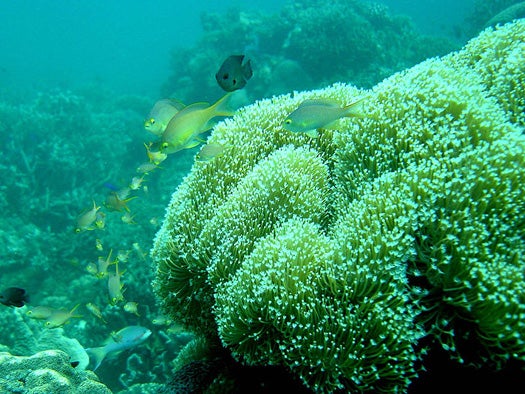 Economists of a certain stripe point proudly to free markets as the most efficient allocators of resources. A biologist studying how calories move through coral reefs or the complex energy cycles of African savanna ecosystems might tell you that waste is far less prevalent in natural systems that maximize nearly every bit of energy. By simply observing food webs it’s easy to see that complexity doesn’t always breed inefficiencies, and that systems that waste not, want not. McGee is particularly interested in this kind of systems-level bio-inspiration, because it has less to do with creating something new and more with re-thinking how things like businesses and larger economic networks are organized. “Drawing inspiration from natural systems can help us rethink or re-imagine our existing systems,” McGee says. “And I think that actually can have quite an impact pretty rapidly. It’s about how you organize things, so you don’t need materials or development time. You can put it into place pretty rapidly.” 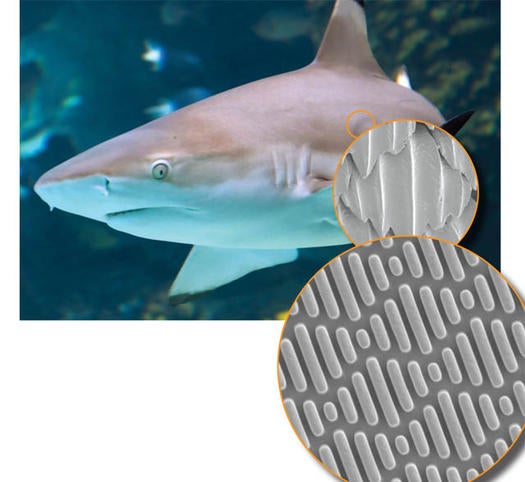 Medicine and biology are by nature already tightly intertwined, and there are numberless examples of medical researchers repurposing natural processes in really crafty ways to create everything from better glues for patching bones to proteins that can potentially treat blindness. But perhaps more exciting than bio-inspired treatments are some of the clever natural mechanisms being leveraged to keep pathogens and injuries at bay. For instance, Florida-based Sharklet Technologies realized that shark skin possesses a unique texture that doesn’t allow bacteria and other organism to take hold. By duplicating this unique pattern on an adhesive synthetic sheet, Sharklet has created a bacteria-free surface that can be used in hospitals, restaurants, and other places where contamination has consequences. What’s more, because this technique doesn’t kill bacteria it will be far more difficult for them to evolve a resistance to it, sidestepping the core problem with most attempts at rendering bacteria harmless. After all, the root technology underwent a 400-million-year incubation period in the ocean, and bacteria haven’t figured out how to thwart it yet. 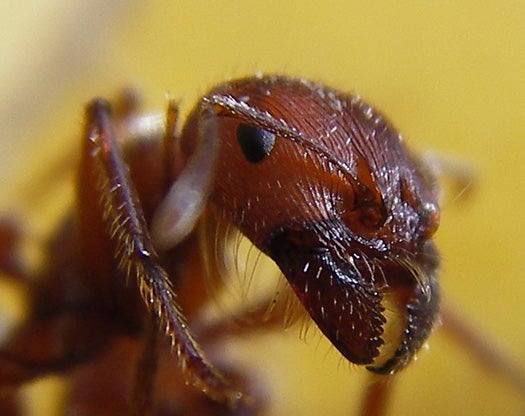 Devising a practical and efficient means of harnessing photosynthesis is quite possibly THE Holy Grail of energy research, but it’s not the only way biomimicry has the potential to change the global energy paradigm. Biomimicry has the potential to rewire the entire world for cheap and abundant energy by informing the design of smart grids and other energy infrastructure. One company is doing so not by looking to plants, but to insects like ants and bees. Toronto-based Regen Energy has been exploring “swarm logic” for several years now, developing software based on the working principles an insect swarm–that is, that each individual node in the system doesn’t need a direct order from the leader to act in a way that maximizes benefit to the entire network. By mimicking swarm intelligence, the company has already developed a means to manage energy networks like the HVAC systems in large buildings to reduce peak electrical demand. And just a few weeks ago Regen announced that the Los Angeles Department of Water & Power is considering tapping swarm logic to help manage its DOE-funded Smart Grid EV integration project, bringing hive mentality to one of America’s largest public utilities. 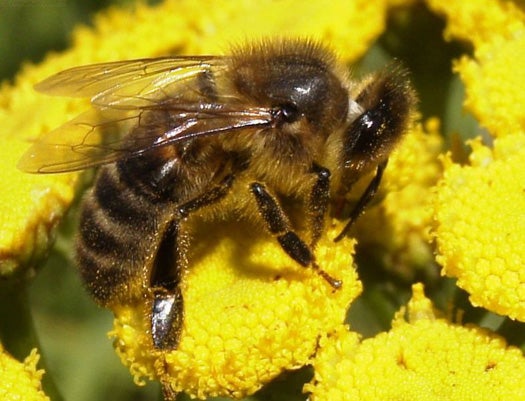 Ants and bees aren’t just informing energy grids. “Some of the early successes in biomimicry already have come from millions of dollars saved by mimicking how an ant communicates information and translating that into how you send server packets over the Web or how you pick a route for your trucks to drive or something like that,” McGee says. There’s plenty more to learn; researchers at Pacific Northwest National Laboratory have developed a computer network security system based on the swarm intelligence ants use to defend their hills, and going all the way back to 2007 researchers inspired by honeybee communications built a system that lets networks optimize performance by taking advantage of idle servers during periods of high demand. But McGee thinks we’ve just scratched the surface of what biology can do for IT. “We’ve already seen an explosion in the relationship between understanding biology using information sciences and then developing ideas in information sciences based on biological insight,” he says. “I think there’s still a lot of room there to play with computer science and biology by learning from biological systems.”
Energy