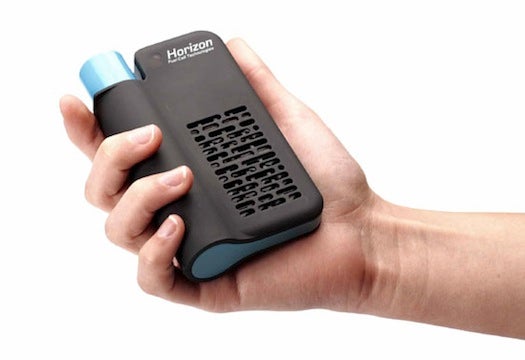 As humanity goes wireless, the last pesky tether we and our gadgets have to escape is the power cable. Portable, battery-powered chargers tend to be both inefficient–so low-powered they struggle to recharge modern smartphones–and environmentally unfriendly. There have been off-the-grid chargers that rely on renewable energy before, valiantly attempting to rectify those problems, but most are ineffective without a steady source of wind, solar power, or abhorrent manual labor like cranking, yanking, or shaking (ech).

Enter the next generation of outlet-free power: Micro hyrdrogen fuel cells like Horizon’s MiniPak. The MiniPak claims to bring the ten times the power of traditional batteries while releasing waste in the form of harmless water vapor. But is it practical?

The MiniPak won’t be widely available until later this year, but we got a sneak preview. The charger is essentially a mini-version of the hydrogen fuel cells that automakers (and goofy tinkerers) have been experimenting with for years, with a couple advantages: It fits in the palm of your hand, and it can charge anything with a USB port, from digital cameras to smart phones to all kinds of other gadgets. Oh, and unlike fuel cells that rely on compressed hydrogen, it doesn’t run the risk of exploding–and when things are supposed to explode, we generally prefer they don’t.

The MiniPak consists of three parts: the charger itself, a HydroSTIK cartridge, and an assortment of USB tips. The HydroSTIK is an AA-battery-shaped cartridge containing hydrogen that’s absorbed inside a sort of metallic sponge to form a solid (thus a hydride). It’s pretty simple to use: Just screw the HydroSTIK into the charger, at which point an LED light indicates that the MiniPak is ready to go, and folks simply connect the USB cable (fitted with the appropriate USB tip) to their device. The device starts juicing gadgets instantly, with charge times that rival conventional wall chargers.

The MiniPak acts as a miniature power plant, converting hydrogen into electricity and charging consumer electronics in real time. It pulls in oxygen from the ambient air through vents and releases stored hydrogen into the fuel cell at the same time. That electrochemical reaction produces an electric charge, as well as a small amount of water, which is released as vapor. Disconnecting the HydroSTIK cuts off the MiniPak’s fuel supply, and consumers re-insert the hydrogen cartridge whenever more charging is needed. You can recycle depleted HydroSTIKs or, eventually, refill them with Horizon’s proposed home fueling station (which won’t be commercially available until an undisclosed time).

Reliable Power: Unlike other off-the-grid chargers like those that rely on solar power, wind, or kinetic energy, the MiniPak is the lazy man’s charger. Devices start juicing the second they’re hooked up to the MiniPak—no need to wait for the sun’s rays or tire one’s arm by pulling a string or turning a hand crank. The charger is also compact and lightweight, making it easy to throw in a backpack or carry on hikes and camping trips.

Better than Batteries: The HydroSTIK is more environmentally friendly and packs more power than conventional alkaline batteries. One HydroSTIK can replace about 10 AA alkaline batteries. Made mainly of nickel and aluminum, empty HydroSTIKs are disposable and recyclable, and unlike batteries, they don’t contain toxic substances like heavy metals and alkalines. 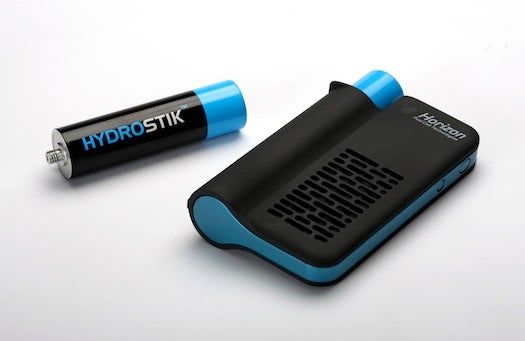 Limited Positions: While the MiniPak is easy to transport, its charging position doesn’t allow for a whole lot of mobility. The charger must be kept upright on a relatively level surface the entire time it’s hooked up to devices, making on-the-go charging virtually impossible. That could be a problem for outdoor enthusiasts who want to power devices while they’re in motion.

It’s Really Expensive: The charger itself comes at a pretty reasonable price of $99. Each HydroSTIK, however, costs $9.99, is not currently refillable by the user, and one cartridge will only charge a smart phone about two times before it runs out of juice. The price is lower than the cost of 10 AA alkaline batteries (which one HydroSTIK can replace), but using the charger on a regular basis isn’t really realistic for the everyday buyer.

The MiniPak delivers reliable, easy-to-use power, so outdoor enthusiasts, intrepid travelers, and anyone without regular access to a wall outlet could definitely benefit from this charger. However, the high cost of replacement HydroSTIKs is kind of a deal-breaker for indoor types or folks who only travel occasionally–there are much more cost-effective solutions out there. Once the HydroFILL becomes available, the MiniPak system should (hopefully) be more economical.

The MiniPak could serve as a viable power system for folks working in off-the-grid regions, like medical professionals and the military. The device would also be useful during power outages or during natural disasters like hurricanes and earthquakes, provided you’ve got a store of HydroSTIKs lying around.