The holidays may be driving video game console sales, but apparently so is the military. The Air Force Research Laboratory... 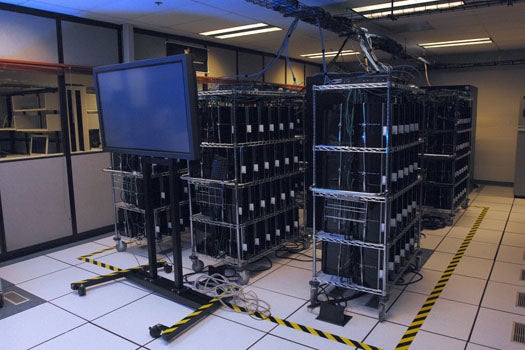 The holidays may be driving video game console sales, but apparently so is the military. The Air Force Research Laboratory (AFRL) has strung together 1,760 PlayStation 3 gaming systems to create what it’s calling the fastest interactive computer system in the entire DoD, capable of executing 500 trillion floating point operations per second.

Known as the Condor Cluster, the array also packs 168 GPUs and 84 servers to direct traffic within the system, allowing all that power to work in parallel. At a total cost of about $2 million, the AFRL estimates the cluster costs something like five to 10 percent of equivalent computers built from scratch. It also consumes just 10 percent of the power.

The array employs the older model PS3s (the larger ones) because new models don’t allow the installation of Linux, a key component for turning the consoles into pliable computing hubs. The AFRL will use the Condor Cluster for quickly processing high-res satellite imagery, radar enhancement, and even research into artificial intelligence.