In The Tiniest Receiver Ever, Graphene Can Directly Detect Radio Signals 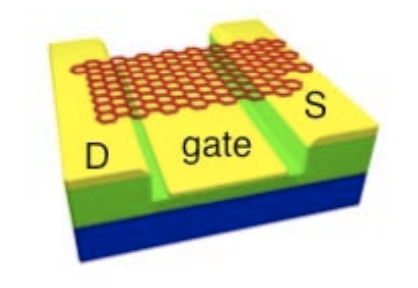 A graphene sheet stretched among three electrodes is the tiniest device to directly receive radio signals, researchers say. Nanoscale radio receivers could be useful for sensing, physics studies and radio signal processing, which could even make them useful for mobile phones.

Stretched between two electrodes and hovering over a third, the graphene sheet works like a trampoline, resonating in response to a voltage that changes with radio frequency signals. The effect can be monitored by measuring the capacitance between the sheet and the third electrode.

This is a major advance, according to Tech Review’s arXiv blog — most nano resonators suffer from parasitic capacitance, a natural problem when small circuit parts are squished close together. This interference drowns out the actual radio signals, and fixing it requires downmixing the signals, which limits the radio’s bandwidth and makes it less effective. But Yuehang Xu and colleagues at Columbia University say their graphene sheet radio has a special gate design that cancels out the parasitic effect.

The technique is two orders of magnitude faster than the typical radio signal mixing method. The researchers were able to read out a radio signal of 33.27 MHz, but they say a smaller, improved device could reach the GHz range.

The biggest drawback: the nano radio works at -321° F, so it will need some tweaks before it can be used in communications devices.