Aboard oceanfaring vessels, real estate is naturally limited. But communications are vital, presenting something of a conundrum for a ship’s... 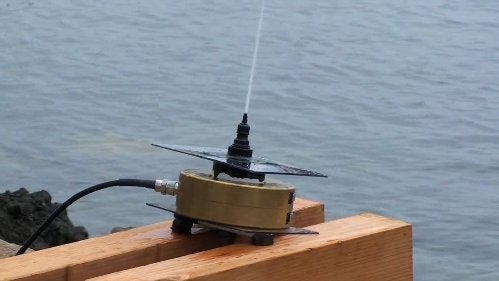 Aboard oceanfaring vessels, real estate is naturally limited. But communications are vital, presenting something of a conundrum for a ship’s communications crews: where to place all the large antennas necessary for long-range (and often encrypted) communications. So U.S. Navy R&D lab SPAWAR Systems Center Pacific (SSC Pacific) engineered a clever scheme to turn the ocean’s most abundant resource into communications equipment, making antennas out of geysers of seawater.

SSC Pacific (SPAWAR, by the way, is short for Space and Naval Warfare) was looking for a way to reduce the antenna loads on those huge mast arrays you see on most naval warships (the typical vessel has 80 antennae aboard). Aside from the fact that antennas can interfere with each other, piling all that metal that high can increase the ships odds of being picked up on radar. Moreover, not all antennas are needed all the time, so SSC Pacific sought a way to erect a quick, temporary antenna that could just as easily be dismantled.

What they came up with is little more than an electromagnetic ring and a water pump. The ring, called a current probe, creates a magnetic field through which the pump shoots a steam of seawater (the salt is a key ingredient, as the tech relies on the magnetic induction properties of sodium chloride). By controlling the height and width of the, the operator can manipulate the frequency at which the antenna transmits and receives. An 80-foot-high stream can transmit and receive anywhere from 2 to 400 mHz, though much smaller streams can be used for varying other frequencies, ranging from HF through VHF to UHF.

The Navy sees the technology as potentially replacing its 80-antenna arrays with just ten of the seawater antennas operating at various frequencies to cover the entire spectrum currently served. And with a tested range of 30 miles, the antennas can go the distance as well. Outside of military use, the antennas could serve as compact emergency antennas for civilian watercraft, communication systems on offshore oil rigs, or on land using saltwater streams enclosed in tubes.