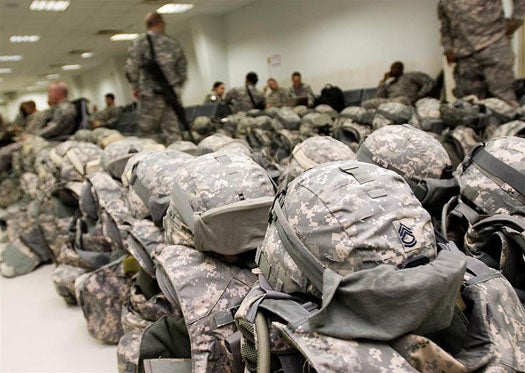 A new material composed of nanospheres is the stiffest organic material ever reported and could lead to everything from tougher metals and composites to better, lighter body armor. U.S. Army
SHARE

Printable body armor, better bulletproof glass, and tougher steel are just a few of the applications for a new materials technology developed by Israeli researchers. A team of scientists there have developed a transparent material made of self-assembling nanospheres that is the stiffest organic material ever created, surpassing the properties of stainless steel and even Kevlar.

Developed by researchers from the Weizmann Institute of Science and Tel Aviv University, the nanospheres are similar to the beta-amyloid proteins that make up the plaques found in the brains of people suffering from Alzheimer’s disease. But the new nanospheres are reinforced with an additional protective layer that makes them really, really strong.

And really, really small. They range in size from about 30 nanometers down to just two microns (by comparison, human hair averages something like 80 microns in diameter). But when assembled the material is extremely tough. In tests, only a diamond-tipped probe was able to dent the material, and then only by applying considerably more force that it takes to damage Kevlar.

Naturally, such a thin, strong material could lead to revolutionary improvements in body armor, and one of the researchers even told Discovery News that in principle you might be able to print custom body armor from the material. But it also could be used for a variety of other purposes, like strengthening existing metals and composites, creating medical implants, or improving the mechanical properties of ceramics and glasses. The researchers even think it might push forward technologically sci-fi projects like a space elevator.

But there’s still a lot of work to be done in the lab before the material sees mainstream usage. Patents are pending, but don’t expect to see printable, nanosphere body armor hitting the market anytime soon. Or diamond-tipped ammunition for that matter. For those who wish to comb through the nano-particulars, the paper is here.