Modern warfare relies increasingly on robotics for intelligence gathering and increasingly for strike capabilities, but the decision-making capacity still rests... 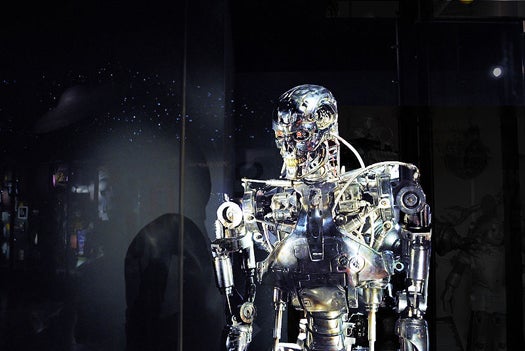 Modern warfare relies increasingly on robotics for intelligence gathering and increasingly for strike capabilities, but the decision-making capacity still rests solely in the hands of human commanders. But British defense company BAE systems is testing a way to turn over battlefield decisions over to robot troops as well.

ALADDIN (Autonomous Learning Agents for Decentralised Data and Information Networks) is BAE’s response to the overload of sensors and data now confronting battlefield commanders who now have UAV observations, soldier-based sensors, satellite data, and reams of other intelligence washing over them in such volumes that, as Air Force Lt. Gen. David A. Deptula puts it, they’ll be “swimming in sensors and drowning in data.” The system allows a network of robot soldiers to quickly collect and exchange information and then to bargain with each other to determine the best course of action and execute it.

The robots are armed to the teeth with algorithms employing a range of models – game theory, probabilistic modeling, optimization techniques – that let them predict outcomes and allocate battlefield resources far more quickly and efficiently than humans trying to process the same amount of data. All that should help troops – both robotic and otherwise – keep stay afloat in the data deluge.

But does it work? ALADDIN hasn’t seen any trigger time yet, but BAE and university researchers collaborating on the system have put it through simulated natural disasters (another potential application). Disasters, they theorize, are similar to warfare in their chaotic nature, and therefore the simulations are a good analog.

And in disasters the system operates well: Robots gather data on the various casualties in different areas, objectively assess where a limited number of ambulances can have the greatest possible impact, and execute a strategy quickly without egos or human emotions or errors clogging up the machinery. It’s like an auction for resources based on need, and while it may sound insensitive to auction off life-saving help to a bunch of machines, when this resource auction was eliminated from some simulations, some of the ambulances weren’t used at all because the system couldn’t figure out where to send them.

BAE is building what’s known as “flexible autonomy” into ALADDIN which will keep the higher decisions in the hands of humans (decisions like “go to war” and “don’t go to war,” for instance). And the idea of being able to crunch sensor data, raw intel, crowdsourced info from the Web, and other data sources to make good decisions quickly could prove invaluable. So while idea of robot armies with decision-making capabilities is terrifying to some, the allure of such high efficiency – be it in warfare or disaster response – is difficult to deny.