From ancient dragon mythology to the lesser offerings from Samuel L. Jackson’s body of work, mankind has long shown an... 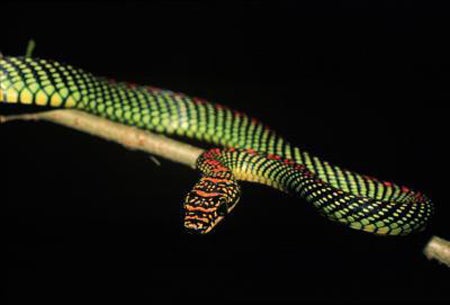 From ancient dragon mythology to the lesser offerings from Samuel L. Jackson’s body of work, mankind has long shown an apprehension toward – one might even say a phobia of – airborne snakes. Perhaps it’s the ability of these flying reptiles to strike fear into even the steeliest of human hearts that has the Pentagon interested in just exactly how these snakes perform their aerial acrobatics.

The snakes – which hail from Southeast Asia and India mostly and are of the Chrysopelea genus – are the subject of intense study by Virginia Tech researcher John Socha, but for a biologist he has an interesting backer in DARPA, the DoD’s blue-sky research arm. DARPA naturally is tight-lipped about its interest in flying snakes, but its dollars are helping Socha create 3-D reconstructions of the biology and physics involved, research that is being published in the journal Bioinspiration and Biometrics.

How do the snakes do it? The don’t really fly, per se, but rather fall with purpose. The snakes climb to the tops of the tallest trees, some 200 feet in the air, and then take a leap. But their method for turning their elongated forms into aerodynamic vehicles is pretty amazing, allowing them to travel nearly 800 feet laterally as they descend. They do this by first falling to pick up speed, then by initiating a strange aerial dance that essentially turns their bodies into one long wing. Some of them can actually pull off a turn in the air.

We’ve saved you the trouble of a YouTube search below. Try not to become mesmerized by the snakes’ fluid motion and seeming ability to cheat gravity. We dare you.