You Are Here: How Digital Maps Are Changing the Landscape of the 21st Century

Mapmakers have more power than ever. But who are the mapmakers? 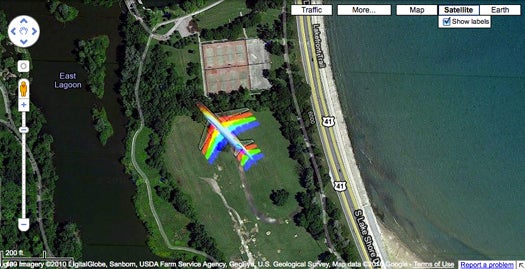 Buried beneath November’s headlines depicting rising tensions on the Korean Peninsula, European economic woes, and the brazen disclosure of confidential State Department cables, a meaningful geopolitical event went largely overlooked: Nicaragua invaded Costa Rica. There was no shooting war and the incident involved only a small swath of disputed territory along the San Juan River, part of which divides the two nations. But a Nicaraguan commander added an interesting wrinkle to the narrative when he dragged an unlikely culprit into the dispute: Google.

The commander cited Google Maps, which had erroneously depicted a stretch of the border in Nicaragua’s favor by as much as 1.7 miles. Google quickly moved to amend the faulty border data and sportingly apologized.

The incident raises some interesting issues concerning the future of mapmaking that, thus far, our brave new digital world hasn’t yet been forced to confront. Whereas cartography – particularly the act (or the art) of drawing political lines on geographical charts – used to be the purview of nations and international bodies, commercial entities like Google, Bing, Mapquest, and other digital services are the principal mapmakers of the 21st century.

Orbiting GeoEye satellites and camera-equipped Google sedans are the Magellans of the digital age, dispatched to explore and catalog — and most importantly make public — unprecedented amounts of geographical data via the Web. If anyone wants to locate anything – be it a coffee house, a post office, or an international boundary – users log into Google or Bing, not the U.N. or the U.S. Geological Survey. But these commercial maps are compiled from a variety of sources and often blend government-derived mapping data with user-generated content. As such, they are subject to conflicting information, differences of political opinion and – as the Nicaraguan incident shows – outright error.

“With a lot of these web-based tools, the need for formal training in cartography is going away, and that’s both a good thing and a bad thing,” says Dr. Brian Tomaszewski, an assistant professor in the Department of Information Sciences & Technologies at the Rochester Institute of Technology. It’s good because it creates rich, centralized data compilations that users constantly update. But before that can happen, someone like Google has to build the underlying map, and there’s no single source or authority for global map data to draw from. That leaves companies in the unenviable position of trying to pick and choose the best data and massage it to fit a single geographical template.

In the case of Nicaragua, it turns out that data was simply incorrect. A post on Google’s “Lat Long Blog” explained the error: “Yesterday we became aware of a dispute that referenced the border between Costa Rica and Nicaragua as depicted on Google Maps. This morning, after a discussion with the data supplier for this particular border (the U.S. Department of State), we determined that there was indeed an error in the compilation of the source data, by up to 2.7 kilometers.”

Viewed on Google Maps, however, an incorrect border looks like any other border, and if the U.S. State Department (and, more importantly, Google) says the border is in one place, who is Costa Rica to say it’s not? In strict cartographic sense, the treaty that originally established the border is the final word. But no one locates a border by reading a 150-year-old treaty; people find borders by looking at maps, and in the 21st century people consult maps by opening their Web browsers. 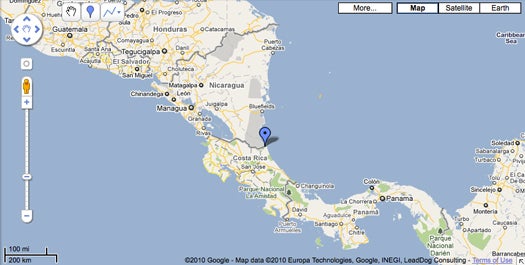 “We look at the computer and say ‘how can it be wrong, it’s on the computer,'” says Dr. Frank Galgano, professor and chairman of Villanova University’s Geography and the Environment Department. It’s to the computer that the world increasingly turns to find just about everything, lending digital mapmakers incredible power to shape users’ geospatial perceptions.

What’s largely missing is the healthy skepticism that users apply to other piecemeal compendia of information like Wikipedia, Galgano says. Google knows its maps contain errors; it says so in the user agreement (you read that closely, didn’t you?). For those people searching for the nearest Starbucks in Lower Manhattan these errors are largely negligible. But for an American hiking near the Iranian border, they can lead to miscalculations with serious consequences.

“People are forgetting to use common sense and critical thinking,” Tomaszewski says. “Google Maps isn’t an official mapping agency like a government. They buy or acquire data and then assemble it into a map. It’s almost frightening to think that militaries or governments might rely on Google as the final word on boundaries or borders between nations.”

But there are a variety of reasons why a government or military might do so, not least of which is the lack of anything better. In the United States, the USGS maintains an extensive collection of publicly available map data accurate down to about 130 feet. Many other nations treat their official maps as state secrets. Still others don’t have the resources to produce accurate maps at all. That makes commercial, publicly available maps like Google’s very attractive, if not any more authoritative.

Why Nicaragua chose to use a Google Map to justify military actions along a tense border is something for the geopolicy wonks to debate. Regardless, the incident embodies the changing nature and impact of cartography in a rapidly digitizing environment where data – often conflicting – is abundant and clearly defined rules are scarce. After all, borders are nothing more than imaginary lines enforced by mutual agreement. Cartography is inexact enough already, and the blurring line between “official” cartography and commercial maps rich in content but low in complexity further compounds that lack of concreteness.

That’s not to say commercial maps don’t carry tremendous value. Their accessibility has revolutionized the way people use maps, particularly as they pertain to commerce. The economic importance of being “on the map” may not be outwardly apparent, but consider the case of Sunrise, Fla.; the community of 90,000 has inexplicably disappeared from Google Maps three times since August of last year. During these “blackouts,” local businesses reported flattening commerce as new customers couldn’t locate them. Online orders ground to a halt for some businesses. After all, how would anyone find a florist or automotive shop that’s not searchable? When Sunrise disappeared from Google Maps, it might as well have disappeared completely.

So what makes a real map in the 21st century? Some would argue that the musty old analog maps tucked into national archives around the world are still the real deal, invested with the authority of governments. But if asked which is more important to their everyday lives, the citizens of Sunrise, Fla., might argue that commercial maps, regardless of inaccuracies or oversimplifications, represent a far greater social and economic utility. To the average person, commercial maps like those compiled by Google, Bing, or Yahoo have become at least as equally important as their “official” counterparts.

The important thing is maintaining a line between the two, and therein lies the problem in a world where data of all kinds is migrating ever more rapidly to the Web and pooling there, waiting for someone to make sense of it.

Dr. Denis Dean, professor and head of geospatial information sciences programs at the University of Texas at Dallas, likens mapmaking’s shift to the commercial, digital realm to the blossoming of user-generated travel sites across the Web. When planning a trip, a user might seek information from established third party reviewers, like magazines or established ratings agencies. But he or she might also troll the Web for social data and customer reviews written by other travelers. Both kinds of data are valuable, he says, but a smart traveler would absorb and use them differently.

“It’s all part of becoming a knowledgeable consumer of maps. The idea that if it’s on a map it’s got to be true is misguided,” Dean says, noting that this is actually a very old problem rather than a new one. As with any data, misuse can lead to debacle, and such mishaps can range in severity from missing an exit on the interstate to interstate warfare. “Someone tried to look at a boundary on Google Maps as if it were a real definitive border and it nearly caused an armed conflict,” Dean says. “That’s as serious as it gets.”