Cellphones are seriously hazardous to the environment when not disposed of correctly. The ecoATM hopes to make recycling easier--with cash 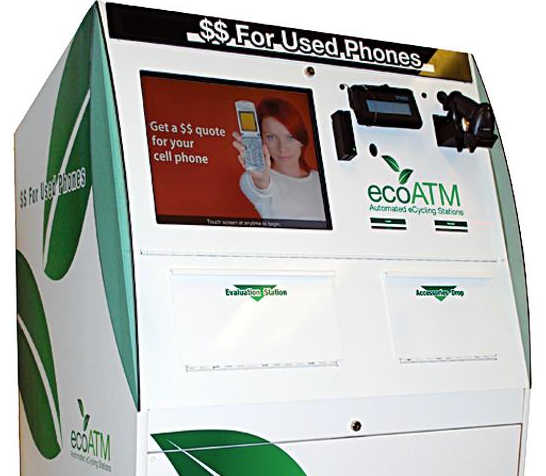 As electronic devices increasingly permeate society, we must confront the question of how to manage the resulting e-waste of discarded cell phones, computers, iPods, and other electronic jetsam in an environmentally responsible way. Inspired by the problem, the fledgling company ecoATM has developed an innovative approach to eliminating eWaste with their prototype “ecoATM kiosk,” essentially a reverse vending machine for old cellphones. Old cellphone goes in; cash comes out.

The ecoATM is designed to identify and evaluate used cell phones, by both inspecting them visually and digitally probing their software. The company developed sophisticated computer algorithms able to visually differentiate a phone from thousands of other models and inspect it for flaws and damage. According to primary inventor and IP holder Mark Bowles and CEO Tom Tullie, the machine is “trained” to visually identify existing models of phones exceedingly quickly–it can identify the phone and assess its condition within seconds. The ecoATM then determines the device’s value, after which the customer can receive cash back once they drop the phone in the adjacent recycle bin.

I visited the ecoATM company headquarters here in San Diego and checked out the most recent prototype. The evaluation procedure is quite simple, with each step prompted by a touchscreen. It takes only a couple of minutes to get in and out with the cash. It goes something like this:

In addition to the technology, which should be appealing to any techno-geek (I actually found it pretty fun just to watch all the bells and whistles during the evaluation procedure), the system makes recycling of electronics beautifully easy. According to Bowles, while there are other electronics recycling options available, they’re often not successful due to the hassle of the process–regardless of good intentions. However, with the ecoATM soon to be made available at shopping malls, Target locations, grocery stores, and other public locations, recycling is as easy as drawing cash from an ATM. Receiving some cash back on the spot obviously increases the incentive to do something positive for the environment.

The first fully automated test prototypes of the ecoATM are currently being fitted and will be available at a handful of locations around the country for field testing soon. According to the company, they plan to go into full production by the first half of next year and should be expanding to over a thousand machines by late 2011. Eventually they hope to increase the database to include computers, iPods and other electronic devices.