But don't worry, it will still be partly a death ray 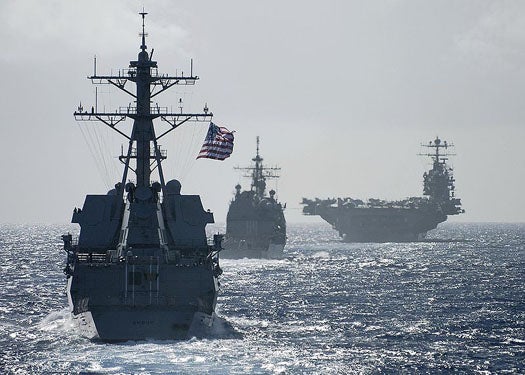 The Navy has been seeking its “Holy Grail” free electron laser (FEL) weapon for a while now, but it would rather you think of it more as a multipurpose laser platform than a death ray. While the Navy’s ship-borne FEL, currently under development at Boeing, will certainly be used to knock incoming threats out of the sky, naval officers really want a platform that can also be used for tracking, communications, target designation, disruption, time-of-flight location, and a variety of other tasks.

Such a multipurpose tool certainly makes the Navy’s laser system seem a more practical use of funding, and a free electron laser is the proper tool for the job(s). All lasers require some kind of medium to turn light into high-energy beams–solid state lasers use crystals, while chemical lasers use (you guessed it) a stew of unfriendly chemicals. Both of those versions have their pros and cons, but neither is extraordinarily versatile; they generally power their lasers up to a certain wavelength and that’s that.

Free electron lasers, on the other hand, use a stream of supercharged electrons to power the laser at varying wavelengths. This versatility is why the Navy has referred to FELs as the Holy Grail of laser tech and why it has embarked on a $163 million quest to develop a working weapons system, $26 million of which is currently facilitating a development program at Boeing that’s due for delivery in 2012.

The ability to shift wavelengths means that unlike other lasers–including the solid-state bad boy Raytheon used to knock a UAV out of the air from the deck of a ship earlier this year–an FEL system can adjust that wavelength for a variety of tasks. Further, it could run off a vessel’s power source rather than requiring its own, so it wouldn’t need to stop and reload.

That’s why, according to Danger Room’s Spencer Ackerman (who is reporting from the Office of Naval Research’s science and tech conference this week), naval program managers are excited about their FEL. Those myriad uses for the platform would require much less energy than is required for actually knocking cruise missiles out of the sky, reducing the platform’s energy energy needs.

Of course, the Navy still wants its laser to target and destroy incoming threats, and therein lies the challenge. The lower power threshold for a weaponized laser of this nature is more or less 100 kilowatts; the FEL at the DOE lab where the Navy has been sponsoring research currently runs at about 14 kilowatts. Boeing’s job is to make up the difference so the Navy’s FEL can perform tasks that require 50 watts, 100-plus kilowatts, and everything in between.

Difficult, but certainly not impossible. There’s more background on the ONR’s efforts to this point in the video below.