We can now tweet from the International Space Station and make phone calls from the summit of Mount Everest, so... 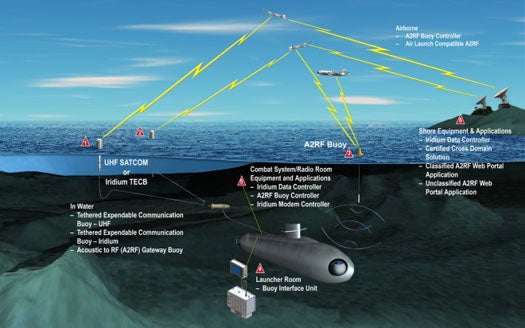 We can now tweet from the International Space Station and make phone calls from the summit of Mount Everest, so why can’t we get any check our email from the ocean floor? A new Lockheed Martin program, plainly named Communications at Speed and Depth, will plug deep-diving stealth submarines into the DoD’s Global Information Grid, just like any other surface vessel.

The system is not unlike other previously attempted schemes to link submarines into surface comms. Like other buoy-based systems, Communications at Speed and Depth requires an antenna to be floated to the surface, but unlike previous systems it will be able to transmit both ways (most previous schemes only allowed subs to receive communications).

The Lockheed System calls for the deployment of three buoys rather than just one, two of which are tethered and one that is free-floating. The tethered buoys are on a very long leash — think, miles of fiber optic cable — allowing the submarine to continue operating at optimal speed and depth (hence the name) while communicating in UHF or through the Iridium satellite network. The free floater can be dropped from a plane or launched from the sub and communicates with the sub acoustically.

All the buoys are expendable; the tethered buoys pack enough power to work for about half an hour before they dispose of themselves. The untethered acoustic buoy can operate for three days. The system is actually capable of voice calls, though phone calls are not the purpose of the system (nor are wireless voice calls particularly stealthy). Instead, the Navy will likely use the system to swap encrypted data and check up on the occasional fantasy baseball roster.

The Navy will get its first batch of buoys for testing next year. More illustrations off just how Communications at Speed and Depth can be seen at Danger Room.