Satellite Navigation Was Created For Submarine Based Nuclear War

In the late 1950s the U.S. Navy had a terrifying and complex problem — how do you tell a submarine... 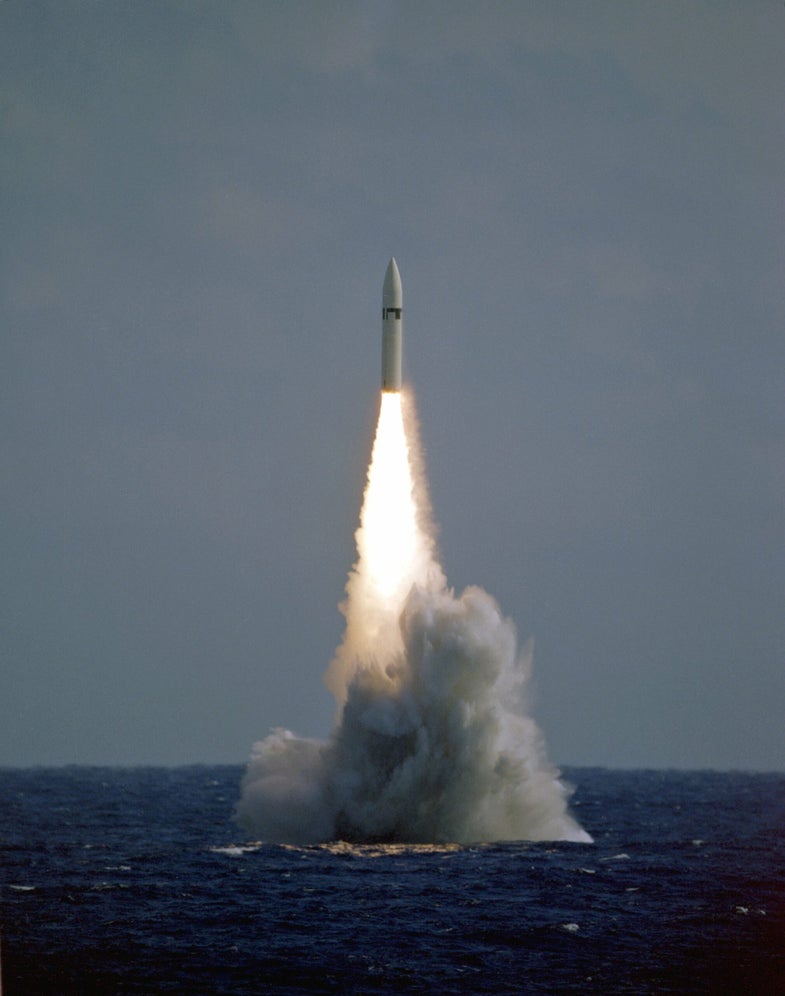 A Polaris A3 Launch. Satellite navigation was originally developed to help guide missiles like this to their targets in the event of global thermonuclear war. U.S. Navy Photo.
SHARE

In the late 1950s the U.S. Navy had a terrifying and complex problem — how do you tell a submarine launched intercontinental nuclear ballistic missile where it needed to go?

Unlike ground-based missiles with the benefit of a fixed launch position, submarine missiles could be given the go code at any given moment — thousands of miles away from the port of origin, and to make things trickier, from under water.

(The Navy originally wanted to mount nuclear warheads to early cruise missiles fired from surface ships but later decided that wasn’t the best idea and moved the enterprise to submarines).

The missiles were already fitted with a complex assemblage of gyroscopes and accelerometers that allowed the missiles to keep a pretty good idea of where it is, an inertial guidance system.

(I’ve seen the inertial guidance system for a contemporary Trident missile on a tour of the old North London Decca Radar plant in 2009. It’s about as confusing and analog piece of electronics as I’ve ever seen).

The mass of sensors was a product of America’s hedge against Operation Paperclip — the mass recruitment of former German rocket scientists that formed the early backbone of what would become NASA after World War II.

In a development led by MIT legend Charles Stark Draper, American scientists developed inertial guidance for the space race (which led to the guidance system on the Apollo missions) but their application in submarines was quickly spotted.

Inertial navigation is pretty good, but not perfect.

As the gyros and accelerometers measured the changes in speed and direction as a submarine moved under the water, there was a certain amount of inaccuracy that grew in the readings.

There were other ways a submarine could track its position, radiolocation services like LORAN C (a radio triangulation service that just recently shutdown), as well as taking depths readings of the bottom of the ocean and comparing them to a series of charts.

But the TRANSIT constellation — unlike LORAN C — was available in the open ocean far away from shore installations.

As a single satellite passed overhead, it would provide a ship with its location data and the navigator would use the change in the Doppler effect of the signal to calculate the ship’s position.

“Because the calculations are both complex and extensive, a small digital computer is required,” according to a 1970s manual for a civilian Magnavox TRANSIT locator.

The Navy developed a special early computer — the AN/UYK-1 — to work the calculations for the satellite reading.

For submarine navigators, it meant a quick trip to periscope depth to reset the inertial navigation for the boat, just in case there was a global thermonuclear war and they needed to fire the missiles.

All the information was entered into the ship’s inertial navigation system (SINS), one of the first shipboard computerized nazigation systems that existed on boomers well into the 2000s.

“For TRANIST fixes, we had to go to periscope depth and raise a special antenna. In those days we didn’t get a Transit fix very often, maybe once every 3 days, because we had continuous LORAN coverage. We were at periscope depth for about 15 minutes, and we’d track the satellite from time of rise to the time it set,” submarine navigator Capt. Peter Boyne of the U.S. Navy told the Smithsonian as part of their superlative navigation exhibit at the National Air and Space Museum in Washington, D.C.

And just like TANG, the Space Blanket and the zero gravity pen, the government funded expenditure trickled into everyday life. TRANSIT became a commercial navigation tool widely in use (some say the Soviet Navy bought commercial readers) until it was supplanted by the much faster GPS system.