In a dangerous legacy of the world’s deadliest conflict, 150,000 World War Two-era sea mines litter the Baltic Sea. The... 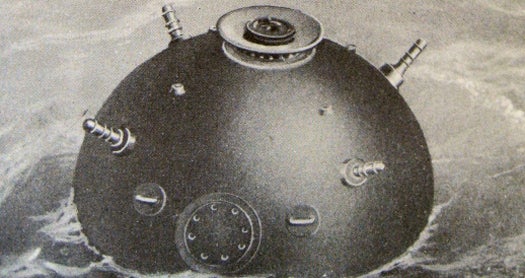 In a dangerous legacy of the world’s deadliest conflict, 150,000 World War Two-era sea mines litter the Baltic Sea. The danger these bombs pose to a proposed gas pipeline has prompted Russia to hire the British firm Bactec International to clear the sea of unexploded ordnance. And for Bactec, that means it’s time to bring out the robots.

Bactec, which previously worked clearing mines from around the Falkland Islands, will use a specially designed robot to scour the ocean floor in search of the 70 bombs blocking the path of the pipeline. When the robot finds a mine, a surface ship releases a high-pitched wail to scare away nearby marine mammals, sets off a small explosive to scare away any fish, and then plants and detonates a small charge on the mine. Altogether, it takes Bactec two days to clear each mine.

Naturally, there are some who object to Bactec’s clearance method. The Baltic Sea is already one of the world’s most polluted waterways, and filling it with the detritus from exploded mines won’t make it any cleaner.

To that end, Russian Prime Minister Vladimir Putin recently signed a pact with the other Baltic Sea countries promising to clean up the 40,000 tons of chemical weapons, and dozens of ships, that Russia sank beneath the Baltic Sea during the Cold War. Hopefully, Russia will follow through on that pledge, and offset the new pollution resulting from the mine clearance.