At the US Money Factory, High-Tech Benjamins Roll Off the Presses

Learn about the new C-note with CNET 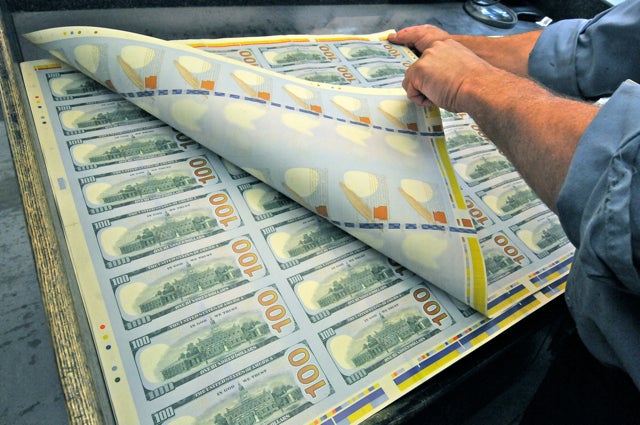 In the future, a few things will still roll off a printing press — dollar dollar bills, y’all!

CNET has a nice behind-the-scenes tour of the process of making the newly redesigned $100 bill, which the government unveiled in April. It won’t be in circulation until February 10, 2011, but CNET’s story provides a nice sneak peek.

In the new note, Benjamin Franklin is joined by a shiny Liberty Bell inside an inkwell, which seems to disappear as you tilt the note. It also has a 3-D security strip and color-shifting ink.

The bureau’s printing presses can churn out 10,000 sheets an hour, but they are only making about 8,000 an hour for the new Benjamins. That’s because they are still in early production, CNET reports. A print load is five piles of 888 sheets, for a total of 4,440 sheets, or $14.2 million.

After the bills get fronts and backs, they undergo an inspection process — a stream of air lifts each sheet so cameras can check each side for defects. About 80 to 90 percent of the bills are perfect, but there are always a few “mutts,” iffy-looking bills that won’t make it to circulation. After being accounted for, the mutts are destroyed.

The individual C-notes are inspected by money factory workers who flip through them $10,000 at a time, checking for defects. The bureau plainly says that at least two people must be in a room at all times — just to be sure none of those bills go missing.

Finally, the bills are put into packs of $10,000, wrapped in those little paper bands and assembled into “bricks” and “skids.”

All that work, and poor CNET writer Daniel Terdiman didn’t even get a sample.

The government has a whole Web site, newmoney.gov, devoted to extolling the new bill’s security features. You can learn more about how it is made at the Bureau of Engraving and Printing — moneyfactory.gov.