Ever since we taught them how to play, the machines have been trying to beat us at chess — and... 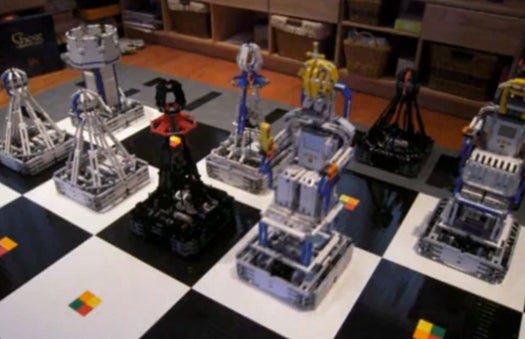 Ever since we taught them how to play, the machines have been trying to beat us at chess — and succeeding. But where it took a closet-sized computer running a complicated computer program to beat Garry Kasparov and claim chess dominance for the machines, child’s toys are now aligning to make you wish you hadn’t ever moved your queen’s bishop. “Monster Chess” was built from 100,000 Lego pieces and plays an autonomous game of chess on a 156-square-foot board, with each massive robotic piece gliding around the board autonomously.

Unlike the epic chess match that capped the first Harry Potter flick, the pieces don’t actually destroy one another when they move to capture (which would be pretty cool), but some pieces like the knights and kings, do have moving features. And from a robotics standpoint the way each piece makes way for those in motion and then returns readily to its prior position is pretty amazing. Watch a full game in the video below (useful spoiler alert: checkmate comes just before the four-and-a-half minute mark, so the game is not as long as the video suggests).

The second video gives a better understanding of how the whole system works and, as Singularity Hub points out, a better since of scale at 2:31 when a child wanders across the board.

The $30,000 autonomous chess set was developed by Steve Hassenplug and a team of enthusiasts and will go on display at Brickworld, a Lego conference taking place in Chicago. There’s more info on Hassenplug’s site, but in essentially the robots use color sensors to detect the edges of each square, as well as those small colored squares to locate the center of each space.

The moves are coordinated by a touchscreen laptop that communicates with the pieces by Bluetooth, so the system is capable of computer-computer, human-human , or human-computer play. But given your luck against that pre-installed chess program on your computer, perhaps you should just watch.