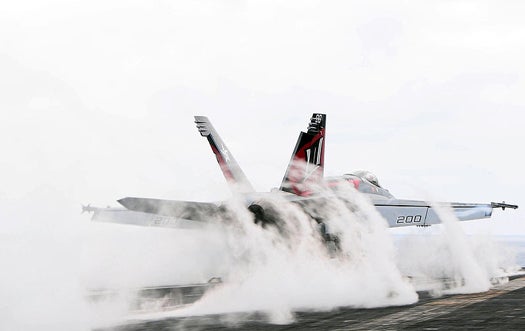 The official performance results aren’t available yet, but General Atomics confirmed this afternoon that it’s next-gen aircraft carrier launch system successfully launched an F/A-18E Super Hornet on Saturday, not with steam but with its new electromagnetic aircraft launch system, or EMALS. Rather than charging up a steam catapult to hurl aircraft down a flight deck and into the air, EMALS is supposed to enable future carriers to launch a wider variety of aircraft more rapidly from their decks using electromagnetic force.

The technology is a critical piece of the Navy’s next-generation carrier design and is expected to be integrated into the U.S.S. Gerald R. Ford – now under construction – but equipment malfunctions and cost overruns cast some doubt on whether the system would be operational in time for its scheduled delivery to the U.S.S. Ford in May of 2011. This weekend’s test should allay some of those fears.

EMALS has several advantages over conventional steam-powered catapults, which are slow to recharge and difficult to adjust. Steam catapults aren’t good for launching small aircraft like unmanned drones that are rapidly taking up a larger share of the military’s aerial arsenal. EMALS recovers faster than steam catapults, meaning future carriers should be able to get more aircraft in the air in less time, and the electromagnetic launcher also wastes less energy.

Of course, a battle-ready technology does not a handful of test launches make. EMALS maker General Atomics and the engineer’s at the Naval Air Engineering Station in Lakehurst, N.J., where the tests were conducted, still have a lot of proving to do if they are going to deliver their electromagnetic slingshot on time. If they can’t, the U.S.S. Ford will get reliable, very last-century steam catapults instead, spelling costly re-designs and likely a year or more in delays.

Meanwhile, China appears to be pressing forward with its first carrier design; naturally, they’re not sharing the details behind their carrier launch system.

For context, we’ve included some highly educational documentary footage of steam catapults in action below.