Building the World’s Largest Telescope, a Mile Under Antarctic Ice

Imagine a telescope array that exceeds the height of the Empire State Building, the Chicago Sears Tower, and Shanghai’s World... 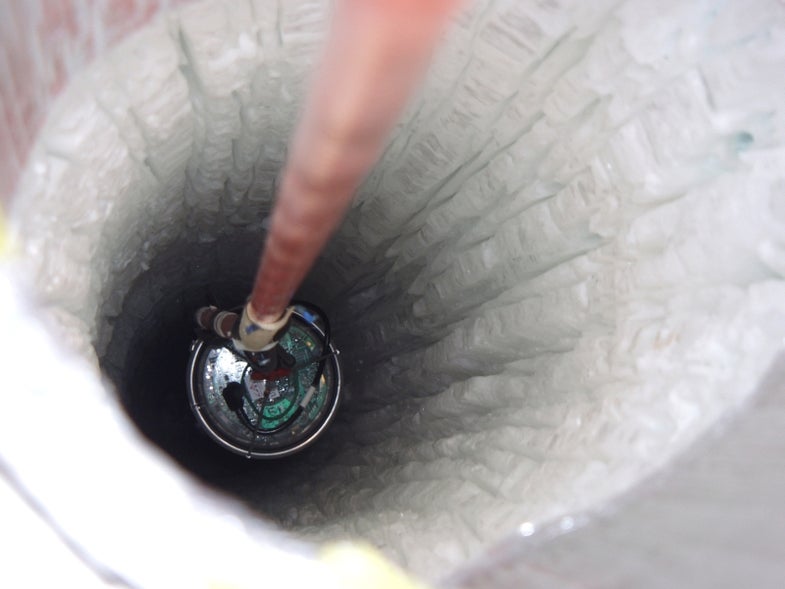 Imagine a telescope array that exceeds the height of the Empire State Building, the Chicago Sears Tower, and Shanghai’s World Financial Center combined. That’s what astronomers are piecing together about a mile beneath the ice at the South Pole. But this telescope isn’t aimed at the sky — it points to the center of the Earth.

The IceCube telescope, developed at the University of Wisconsin with funding from the National Science Foundation, will search for neutrinos generated by the most violent cataclysms in the universe, such as gamma ray bursts, supernova explosions, and other events involving black holes. The neutrinos could hold the key to understanding the origin and physical processes of the highest energy particles in nature.

Neutrinos are neutrally charged subatomic particles that are emitted when neutrons transform into protons in nuclear reactions. They travel at close to the speed of light in straight lines from their source and are so small they can pass through solid matter almost undisturbed. But this same trait makes them extremely difficult to detect. Scientists have been looking at doing astronomy studies using neutrinos since the 1950s, but the challenge has been the technology needed to build a a sufficiently sized observatory — detectors must be very large to detect a significant number of neutrinos.

IceCube is being engineered under the ice by deploying thousands of spherical sensors called Digital Optical Modules (DOMs). Using a hot water drill, the DOMs are inserted into holes melted into the ice on “strings” of 60 modules each at depths of 4,700-8,000 feet. It takes about 11 hours to deploy one string of 60 DOMs, with about 200,000 gallons of ice being melted for each hole drilled. IceCube detects the blue light from the nuclear reaction initiated by the direct strike of a neutrino on an atom of ice, and each DOM will have a computer that relays digital data to the surface.

Building the IceCube telescope under the Antarctic ice will protect the detector from cosmic rays and other background radiation. Once the detectors are frozen in the ice, they will remain there for about 25,000 years — the estimated time it will take for that section of the ice to migrate to the Antarctic coast. Although the research team can tweak operations by sending electronic signals to the sensors, no maintenance is possible once they are deployed in the ice.

Scientists believe that most of the neutrinos floating around originated about 15 billion years ago, shortly after the birth of the universe. They also theorize that there are now so many neutrinos that they constitute a cosmic background radiation, believed to be the “afterglow” of the Big Bang. New neutrinos are also being produced from nuclear power stations, particle accelerators, nuclear bombs, general atmospheric phenomena, and supernova explosions.

This week, EE Times interviewed Albrecht Karle, a Wisconsin physics professor who is working on the project.

The telescope array is about 95 percent constructed, with completion scheduled for 2011 at a total cost of $271 million.