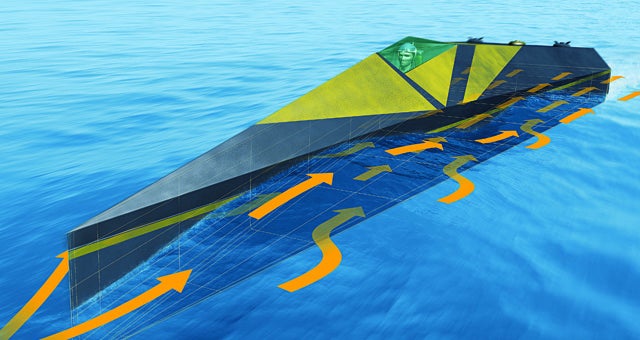 An undercover team of Navy SEALs isn’t worth much if their transport boat’s wake betrays their approach. Nor does it help if they come ashore with back pain and possible organ damage from the boat’s constant bouncing. A sleek new hull design could help troops slip through waves undetected and unscathed, while also setting a new standard for efficient nautical design.

While experimenting with high-speed yacht designs for the America’s Cup sailing race, aerospace engineer A. Calderon began investigating ways to reduce the wake that builds around the vessel’s bow, sides and stern as it cruises through water and grows as the boat moves faster, increasing drag and draining fuel. The bow of Calderon’s concept, called the transonic hull, is shaped like a tight V and cuts through water like a knife, diverting the wake sideways and under the boat to nearly eliminate it altogether. Preliminary tests of a 20-foot wood-and-fiberglass prototype indicate that the model incurs 28 to 38 percent less drag than an ultra-streamlined America’s Cup yacht, which Calderon says could translate to 30 percent better fuel economy than similar boats. And it powered through waves four feet tall without bouncing.

The design is still unproven. The early results look promising, says Luigi Martinelli, a fluid-dynamics researcher at Princeton University, but he worries that the hull’s efficiency might not translate well to slow speeds. “Calderon has focused on the right part of the boat to make real progress in reducing bow wake,” he says, but adds that he needs to see more test data and computer simulations to vouch for the concept.

Later this year, Calderon’s Transonic Hull Company plans to build a 100-foot prototype that incorporates strength and stability improvements gleaned from its first tests. If the technology scales up, the company will begin marketing the craft to offshore drilling companies as a boat that zips through storm chop in emergencies and start construction on a 100- to 300-foot stealth model that can take on 20-foot waves at 55 mph aimed at police and military applications.