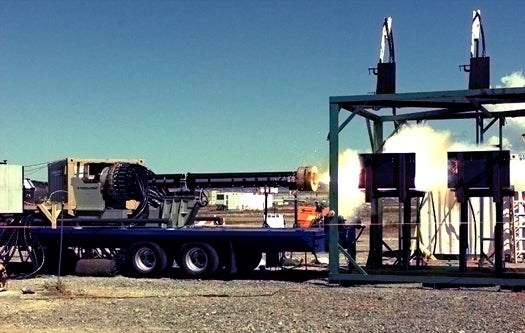 This is my boom stick. Well, not mine, but General Atomics’. Known primarily for manufacturing the Predator drone, General Atomics has also moved into the weapons business, as demonstrated by this first ever successful test of their “Blitzer” rail gun. This involved the cannon firing a number of rounds down the range at the US Army’s Dugway Proving Grounds.

Railguns were first proposed over a century ago, but have not yet made their appearance on the battlefield. They are similar to regular artillery pieces, in that they fire a giant shell, but different in that they do so without the use of combustion.

Instead, railguns mount the projectile on two magnetized rails (hence the name), which then propel the shell out of the muzzle using electrical conductivity. This is different from the so-called Gauss cannon, which uses a magnetic projectile and magnetic fields to accomplish the same task. Either way, magnetic fields can accelerate a shell far faster than gunpowder, increasing the range and speed of the projectile.

General Atomics conducted the test in association with the Office of Naval Research, and plans on continuing testing through next year, when they will finally start launching “tactically relevant aerodynamic rounds”.

I don’t know what “tactically relevant aerodynamic rounds” are, but it certainly does sound bad-ass.

No video was released, unfortunately, but to substitute, check out this slow-motion test firing of a similar railgun last year–plus an explanation on why there’s still muzzle fire from gunpowder-less shot.