BMW debuts the most powerful hybrid ever made 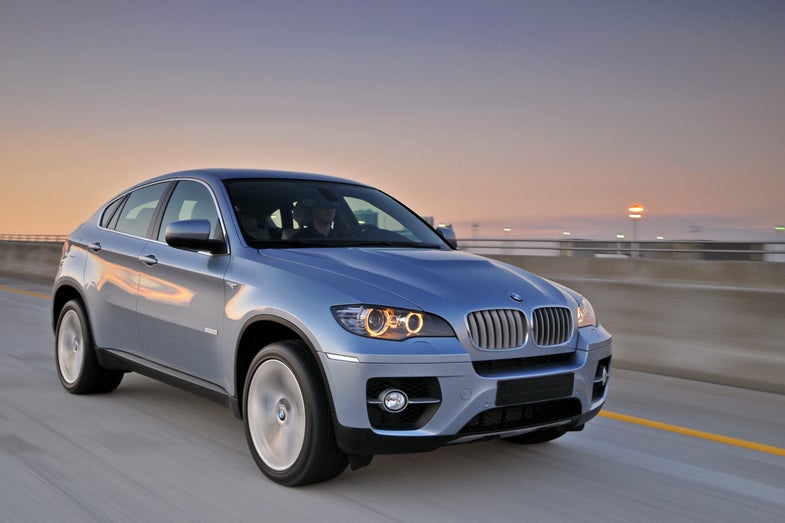 Two years ago, when BMW first unveiled the X6, its high-performance, high-end crossover SUV, it announced a hybrid version as well. Now that hybrid has arrived, and if turning a 5,688-lb luxury SUV with a twin-turbo V-8 into a hybrid seems like a bit of a contradiction, well, the 2010 BMW ActiveHybrid X6 certainly is.

This is the most powerful hybrid ever made. Its 400-horsepower gas engine and two electric motors combine to produce 485 horsepower and 575 lb-ft of torque. It can race to 60 mph in 5.4 seconds — just 0.1 second slower than the X6 xDrive50i on which it’s based. It delivers power to all four wheels via a seven-speed automatic transmission. It is, in short, a monster.

Why would BMW choose such a beast to become its first full hybrid? The company says it’s because of the high-percentage gain in fuel economy you get from making low-mpg vehicles more efficient. Turn a 12mpg vehicle into a 17mpg vehicle, and you’re getting more than 40 percent better mileage.

To get there, the ActiveHybrid X6 uses a two-mode hybrid system developed in conjunction with General Motors and the former DaimlerChrysler; it’s the system already found in the Cadillac Escalade Hybrid. An electric continuously variable transmission (ECVT) distributes power through two different drive modes; one is used during stop-and-go driving and the other when driving at higher speeds. The two-mode system allows the X6 to cruise up to 37 mph on electric power alone, only switching to engine power if the driver depresses the throttle more forcefully.

We noticed sluggish response when attempting to accelerate rapidly, as if the system was having trouble coordinating all the components, and the regenerative brakes feel oddly spongy at first, before rapidly firming up. Nevertheless, handling is superb and power output seems inexhaustible when the V-8 is doing the work.

But back to those fuel economy numbers. The ActiveHybrid X6 is rated at 17 mpg city, 19 mpg highway — up from 12/18 in the xDrive50i. Yes, combining city and highway ratings, that’s a 20-percent improvement. But in a pricey, small-batch, decidedly niche vehicle, numbers like that don’t inspire much love.

Particularly when you consider the $89,725 starting price. The ActiveHybrid is a supremely comfortable vehicle loaded with all the usual premium gadgets, including head-up display, rear-view camera, gorgeous leather seats and a great audio system. But so is the X6 xDrive50i on which the ActiveHybrid is based — and the ActiveHybrid is a full $22,000 more expensive. That premium will be hard for all but the most die-hard (and shockingly well-off) greenie to swallow.

There’s no reason to doubt that BMW is serious about making efficient vehicles, but the reason for the existence of the ActiveHybrid X6 is unclear. If you want to buy a large crossover and help save the world, look into the 26mpg highway X5 xDrive35d. You’ll save nearly $40,000 and gain some headroom in the process.