Having one of those days where even a hearty bowl of Fruit Loops and Jack Daniels can’t get you out... 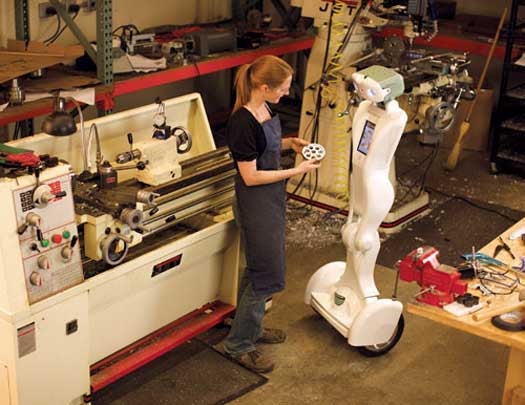 Having one of those days where even a hearty bowl of Fruit Loops and Jack Daniels can’t get you out of bed? A telepresence robot can come into the office for you, elevating telecommuting to a decidedly new level. The somewhat humanoid ‘bots, produced by Mountain View, California-based Anybots, are controlled via video-game-like controls from your laptop, allowing you to be “present” without actually being in the office.

The robots are equipped with a screen displaying your smiling mug to your co-workers, as well as a camera that beams a feed straight to your computer screen. They’re also mobile, so you can still drop by co-workers’ offices unannounced, presumably to let them know that a robot will be filling in for you today. There are a few variations that Anybots is toying with, including one with long arms and hands, and another with a laser pointer that, while useful for pointing things out in a physical environment, will prove slightly less cool than Johnny 5’s shoulder-mounted laser cannon.

In all seriousness, Anybots plans to have a telepresence robot to market in the second half of next year. While it may seem to be little more than an expensive videoconferencing link (the product is expected to retail between $10,000 and $15,000), it could be a valuable tool in workplace environments where a more physical presence is handy, such as for U.S. businesses trying to keep an eye on manufacturing floors overseas. After all, you never know when a surrogate might come in handy.

All right, all right. See QA operating from both sides of the link in the (real) videos below.