What’s better than packaging an incapacitating, “less-lethal” electric shock device in a shotgun shell so it can be fired from... 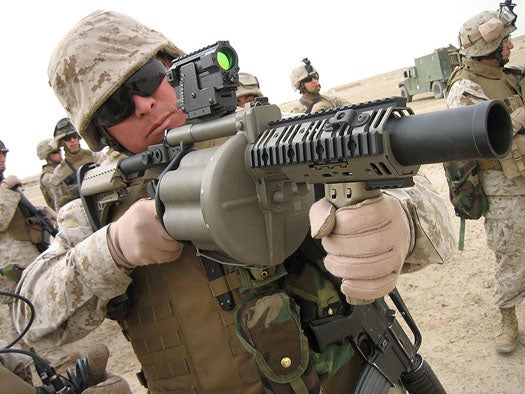 The new Human Electro-Muscular Incapacitation (HEMI) projectile is being developed for the Pentagon by Taser International under a $2.5 million contract and should be ready for prototype testing some time after the new year. With a range of just under 200 feet, the HEMI can reach out and touch someone more than three times further away than Taser’s XREP shotgun cartridge devices, granted the user has a grenade launcher within easy reach. As such, it is being developed with military and tactical applications in mind, rather than for use by mall security cops or police on the standard beat.

Of course, there is concern that the projectile itself may be more lethal than the electric shock it delivers, especially if the projectile strikes the target in a sensitive area like the head or a vital organ. But Department of Defense project managers for the Joint Non-Lethal Weapons Directorate (JNWLD) insist the cartridges deliver minimum impact force upon delivery to a target. The team is testing a variety of noses for the projectile that disperse the force, making the blunt impact less traumatic on the unlucky recipient.

Then there is concern about the shock itself. Upon impact, the target’s incapacitation could last up to three minutes – presumably enough time for the user to cover the 200 feet separating him from his target, but also long enough to deliver a fatal dose of electric shock. DoD hasn’t pin-pointed exactly how long the duration of the shocks will last, but incapacitation time can be adjusted to meet whatever requirements are deemed necessary. But one would think that after being pegged with a 40-millimeter projectile it wouldn’t take too much further prodding to convince a target to lay down arms.