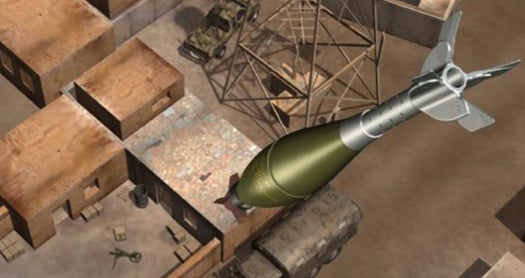 Precision guided munitions have completely altered the face of warfare, but the humble mortar has remained virtually unchanged for decades, lobbing explosive rounds at a faraway enemy with a relatively high degree of inaccuracy. Finally, the U.S. army is giving this this infantry workhorse a 21st-century update, fielding GPS-guided mortar rounds for the first time.

One Infantry Brigade Combat Team in Afghanistan has already received the new rounds, known as Accelerated Precision Mortar Initiative cartridges (APMI), and seven more are expected to receive them in the next sixth months. The GPS-guided 120-millimeter mortar rounds will offer infantry commanders precision-strike capability, offering them an alternative to blanketing an area in indirect fire.

That’s a key advantage. U.S. troops operating in places like Afghanistan already walk a tightrope between engaging a dangerous enemy and protecting civilian lives and property, and this fact isn’t lost on insurgents who launch attacks from populated areas in hopes that U.S. troops won’t retaliate. A GPS-guided mortar allows troops to to launch a mortar shells from protected positions into an areas where other friendly troops are operating or where collateral damage is possible with a far higher degree of control and certainty. It’s a smarter weapon for a new kind of warfare.

The APMI XM395 cartridge employs a standard 120-millimeter projectile body, but packed in the nose is a GPS receiver and controller that ensures the aerodynamic directional fins guide the shell toward the target. It also contains a multi-functional fuse that can be programmed to detonate upon impact, in the air, or after it penetrates the ground or a structure. Coordinates are dialed into the round using a computer.

The result is a round that is at minimum seven times more accurate than the most accurate round currently fielded, though there is still some room for error–the APMI is expected to hit within about 30 feet of a target at least half the time, not perfect by any means but still a remarkable improvement. That kind of accuracy also offers one more distinct advantage: less rounds fired means more rounds saved, which cuts down on vulnerable resupply missions to troops in combat zones.