A kinetic missile that flies at mach 7

Picture this: A massive destroyer receives the location coordinates of an enemy headquarters more than 200 miles away. Instead of launching a million-dollar Tomahawk cruise missile, it points a gun barrel in the direction of the target, diverts electric power from the ship’s engine to the gun turret, and launches a 3-foot-long, 40-pound projectile up a set of superconducting rails. The projectile leaves the barrel at hypersonic velocity–Mach 7-plus–exits the Earth’s atmosphere, re-enters under satellite guidance, and lands on the building less than six minutes later; its incredible velocity vaporizes the target with kinetic energy alone.

The U.S. Navy is developing an electromagnetic railgun that will turn destroyers into super-long-range machine guns–able to fire up to a dozen relatively inexpensive projectiles every minute. The Navy is collaborating with the British Ministry of Defence, which has a similar effort under way. In 2003, its facility in Kirkcudbright, Scotland, hosted a 1/8-scale test of an electromagnetic railgun that produced stable flight in a projectile fired out of the barrel at Mach 6. But Capt. Roger McGinnis, program manager for directed energy weapons at Naval Sea Systems Command in Washington, D.C., estimates the U.S. version won’t be “deliverable” until 2015 at the earliest.

The technology behind the electromagnetic railgun has been around for more than 20 years, but early efforts wilted because of the huge power requirements: No ship could generate or store enough electricity to fire the gun. The concept was revived a few years ago when the Navy announced plans for its next-generation battleship, the all-electric DD(X). “In the past, destroyers had 90 percent of their power tied to propulsion,” explains McGinnis. “But with DD(X), you can divert the power to whatever you need. We can stop the ship and fire the railgun as many times as we need, then divert the power back to the screws.”

The barrel of the electromagnetic railgun will contain two parallel conducting rails about 20 feet long, bridged by a sliding armature. In the current design, electric current travels up one rail, crosses the armature, and heads down the second rail. The loop induces a magnetic field that pushes the armature, and the projectile aboard it, up the rails.

The challenges that remain include ensuring that the gun can target enemy sites with precision, and creating equipment that can withstand the gargantuan pressures the gun will create. “Right now, guns are only as accurate as the targeting of the bore, and now we’re talking about 200-plus-mile ranges, so there has to be aerodynamic correction,” says Fred Beach, the assistant program manager for the electromagnetic railgun at Naval Sea Systems Command. The projectile, he says, will receive course correction information from satellites and will steer itself with movable control surfaces. And because the projectile will be subjected to up to 45,000 Gs during firing, the onboard electronics must be strengthened to withstand the acceleration. Forces inside the gun itself–particularly getting the armature to move easily within the system–are also challenging the designers. “Getting two pieces of metal to slide past each other is pretty hard–we’re getting a lot of damage to the rails,” Beach says.

The electromagnetic railgun’s projectiles will cover 290 miles in six minutes–initially traveling 8,200 feet per second and hitting their target at 5,000 feet per second. Current Navy guns, which shoot powder-ignited explosive shells, have a maximum range of 12 miles and, because they are unguided, are difficult to aim. Though guided missiles, the current long-range alternative for destroyers, can achieve ranges comparable to that of the electromagnetic railgun, their cost and storage problems are what’s driving the efforts to find an alternative. Ships can only carry up to 70 guided missiles and must return to port to restock because the missiles cannot be loaded at sea, whereas railgun projectiles can easily be loaded at sea, and by the hundreds. Also appealing is that the electromagnetic railgun’s missiles do not contain volatile explosives; the weapon does its work with kinetic energy. 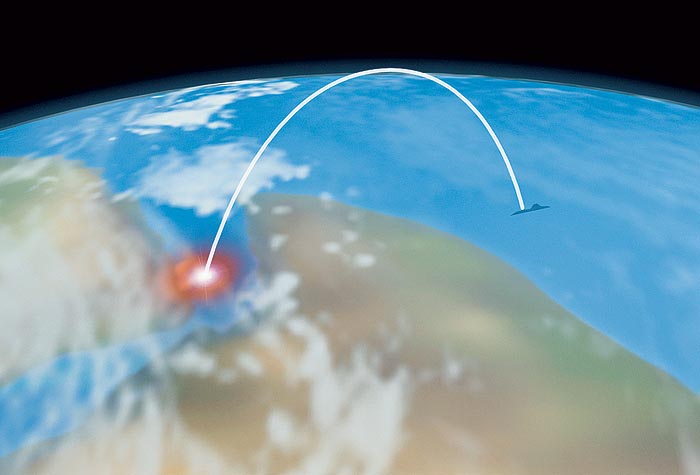 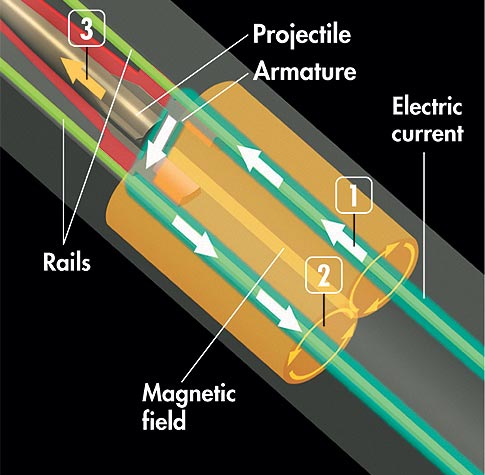 A railgun uses electric current to launch a projectile. The current-up to 15 million amps-travels up one rail and down the second (1). This current induces a magnetic field across an armature (2) that bridges the rails. This armature also carries a current; the interaction between this current and the magnetic field accelerates the armature, and the projectile aboard it, to Mach 7 (3). Adjusting the range of the weapon is as easy as reducing the electric current supplied to the rails–the lower the current, the slower the projectile leaves the barrel and the shorter the distance it travels. 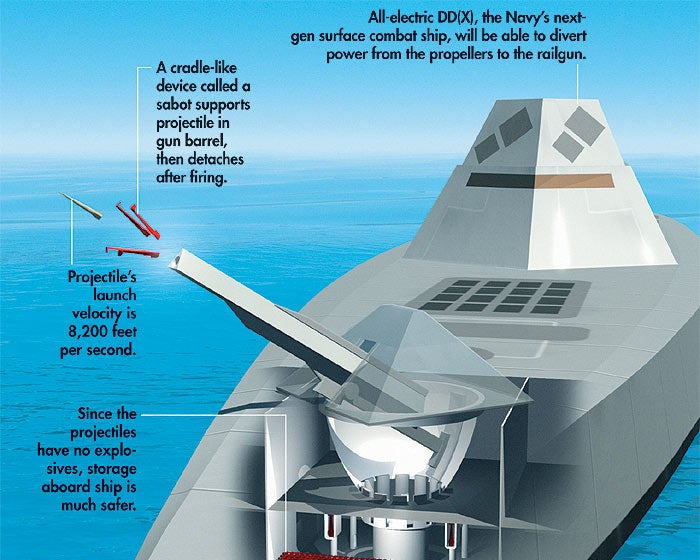 Projectiles fired from an electromagnetic railgun will travel up to 290 miles in less than six minutes, exiting the atmosphere before hurling into their target at a velocity of 5,000 feet per second. The force of the impact will obliterate targets without an explosive aid.
Military
Weapons
naval sea systems